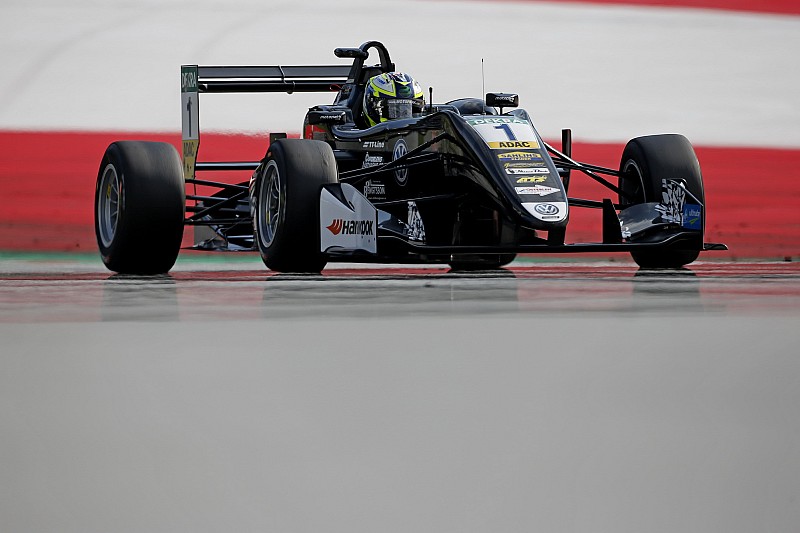 A last-lap collision denied Lando Norris the 2017 European Formula 3 title with one round to spare, as Joel Eriksson took the race win in a thrilling Red Bull Ring finale.

Carlin-run McLaren protege Norris staged a thrilling chase of BMW junior Eriksson’s Motopark, the two even almost interlocking wheels on the long downhill straight to Turn 4 on the second lap.

Although Eriksson pulled the gap to over half a second after an early full-course yellow, Norris closed up again and began challenging for the lead once more.

With five and a half laps to go, Norris tried to run alongside Eriksson on the run to the first of the two quick left-handers, but ran into the rear end of the Swede's car, sending the Briton’s right-front-wing endplate flying.

“It was a little bit hard race, but I didn’t expect anything else because I was starting on four old tyres and Lando had two new,” said Eriksson.

“We had a proper fight in the early laps – I think it was fair play from both of us. Then came the contact near the end: I had a bad exit out of Turn 4, and he had a really good one.

“He had my slipstream, I was closing the inside, and I could see him everywhere – right, left, right, left. I felt a big hit crashing into me, and it lifted the rear.

“I don’t know what he was doing – I think he was a bit excited to win the race.”

Norris's challenge for the win was over, but second was easily enough for him to clinch the title, with the last remaining title rival Maximilian Gunther down in eighth after losing out in the first-lap jostling.

The Briton's problem allowed the battling Ralf Aron and Ferdinand Habsburg to close in, and the former's Hitech car was closer than ever as they began the final lap.

The Estonian forced Norris to defend into the uphill Turn 3 hairpin, then chanced his luck with a late outbraking move into the downhill Turn 4.

But Aron locked the brakes, sliding into Norris and taking them both helplessly into the gravel and out of the race.

Gunther was classified fifth, giving him just enough points for the title to go to the Hockenheim finale: he is 72 adrift, with 75 on the table.

Carlin driver Habsburg finished second, but a 5s penalty for track-limits offences dropped him to fourth.

Next on the road were Hitech GP’s Nikita Mazepin, who took his second podium of the day, Joey Mawson (Van Amersfoort Racing) and Tadasuke Makino (Hitech).

However, Mawson, who had pulled off a spectacular pass on Makino after the FCY, also earned a 5s track-limits penalty, dropping to seventh.

That allowed Honda protege Makino into third for his maiden F3 podium.

Callum Ilott almost stalled from third on the grid, and was trying to wrest third place back from the fast-starting Aron in the two quick left-handers when suspected contact sent him spinning through the gravel trap and out of the race.

How Indians performed over the weekend (September 22-24)