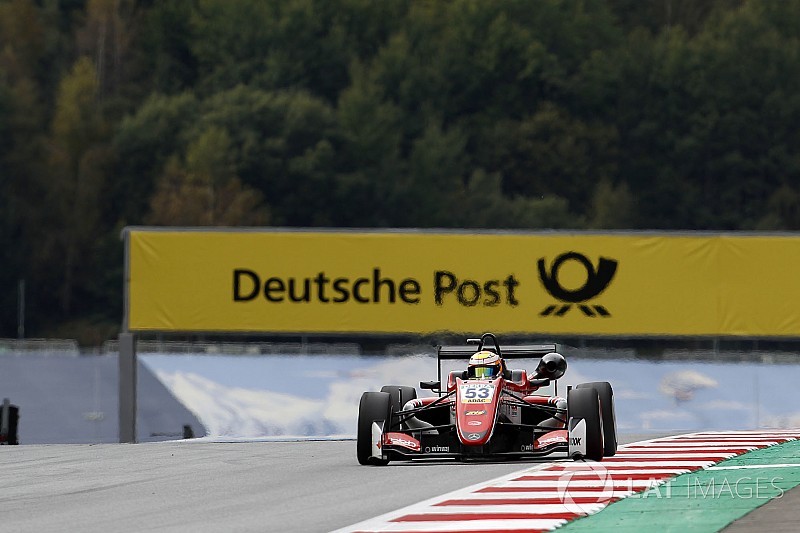 Britain’s Callum Ilott grabbed pole position for the first European Formula 3 race of the weekend at the Red Bull Ring in a thrilling qualifying session.

lott pipped Prema Powerteam stablemate Maximilian Gunther by just 0.016 seconds with a late effort that came with one minute of the session to go.

It represented a return to form for Prema, which had a difficult weekend by its own high standards last time out at the Nurburgring.

“Obviously Maxi improved quite a lot so I had to step it up,” said Ilott, who also topped free practice earlier in the day.

“Earlier on I was doing laps where I’d just make a little mistake in one corner – it was enough to be P1 at the time, but I knew Maxi could do a quicker lap.

“In the end I just managed to put one lap together and that was good enough to pip him.

“I was confident I knew I could do it, but I wasn’t confident it could actually happen – it’s difficult to do the perfect lap here and also at the right time.”

Gunther, who needs to prevent championship leader Lando Norris outscoring him by more than one point this weekend in order to take the title battle to the Hockenheim finale, said: “I put in a pretty good lap, but that lap destroyed my rear tyres so I was not able to improve.

“It was a good battle with Callum, and to be honest I’m happy with the performance.”

Regarding the points deficit he faces to Norris, the Mercedes protege added: “Of course the goal is to keep it open to Hockenheim. It [winning the title] is difficult, but nothing is impossible, especially in sport – as you saw in the Singapore Grand Prix last weekend!”

Joel Eriksson bounced back to form after a sorry recent run to put his Motopark car third on the grid.

The Swedish BMW junior felt there was a balance issue in free practice but that things improved in qualifying “and we’re always quite fast in the race”.

McLaren F1 protege Norris felt he was hampered by understeer in his Carlin car, but just held on for fourth in the face of late efforts from Hitech GP duo Tadasuke Makino and Nikita Mazepin, who locked out the third row.

David Beckmann was as spectacular as ever and lost part of the underside of his Motopark car on the brutal kerbs at the penultimate turn, but he took seventh from Joey Mawson – the Van Amersfoort Racing man has a three-place grid penalty hanging over from the Nurburgring and will start 11th.

That moves Mawson’s VAR team-mate Harrison Newey up to eighth, while next was Ferdinand Habsburg, but he also has a three-place grid penalty.

Jake Hughes would be 10th on the grid, but an engine change after first free practice means he will take a 10-place penalty for the opener.

Where are Indians racing this weekend (September 22-24)