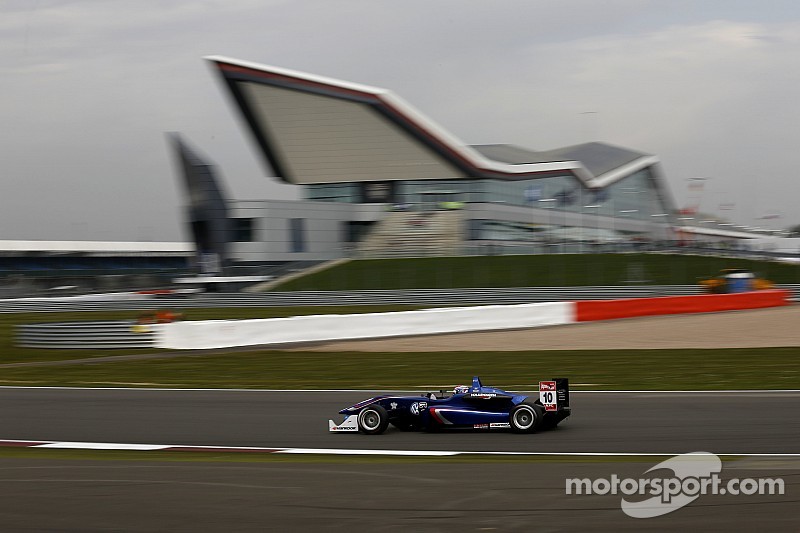 Russell seized the initiative at the very start of the race – held on a dry track after a damp opening race earlier in the day – as he crucially beat poleman Leclerc on the drag to the first corner.

Leclerc briefly slipped back to third behind Russell’s Carlin teammate Antonio Giovinazzi in the opening exchanges, but was able to muscle his way back past midway round the opening lap as the Safety Car was deployed in response to an incident lower down the order.

With Michele Beretta, Tatiana Calderon, Sergio Sette Camara and Callum MacLeod all eliminated in the carnage, Russell was able to press home his advantage at the head of the field once racing resumed following a two lap interlude.

As the 18-lap race neared half-distance, Leclerc briefly looked like mounting an assault for the lead, getting the gap to Russell down to seven tenths at one point before dropping back in the latter stages.

Behind the pair, Giovinazzi held of a determined attack by Lance Stroll to take the final podium place, with Brandon Maisano completing a top five that never changed after the early Safety Car period.

There was plenty of action behind the leading bunch however, as a large train of cars formed in the wake of Fabian Schiller when the race got back under way.

Alex Albon broke clear of the group after passing Schiller shortly after, the Thai going on to finish a lonely sixth, while the tightly bunched pack afforded race one winner Felix Rosenqvist the perfect opportunity to scythe his way through the field after starting last, the result of a bodywork infringement in qualifying.

Rosenqvist was already up from 35th and last on the grid to 13th behind the Safety Car after expertly negotiating the early chaos, and steadily climbed the order after the restart to move up to seventh by two-thirds distance, where the Swede would remain.

Also safely dispatching Schiller were Pietro Fittipaldi, Santino Ferucci and Mikkel Jensen, who completed the top 10, but Jake Dennis was less fortunate. The Brit dropped from sixth to 14th at the start and never recovered, failing to finish after getting tangled up with Schiller on the final lap.