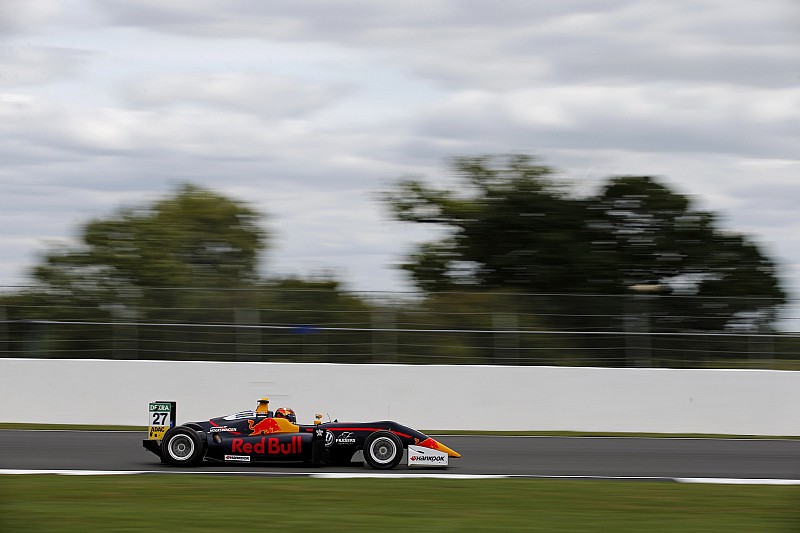 Red Bull junior Ticktum pulled off a superb manoeuvre at Stowe Corner on long-time leader Sacha Fenestraz with four laps remaining to claim the win in his Motopark Dallara-Volkswagen.

Ticktum had qualified third, and bogged down at the start before dipping the clutch again, just holding off teammate Jonathan Aberdein in the opening corners.

A bid from Zhou on the Carlin car of Fenestraz at the Brooklands left-hander didn’t come off for the Shanghai racer, and allowed Ticktum momentum into the long Luffield right-hander.

Ticktum went right around the outside of Zhou to snatch second place, before setting off after Fenestraz.

For lap after lap Ticktum would get into Fenestraz’s slipstream, but he couldn't quite get close enough to pull off a move for the lead.

On lap 15 of 19, he tucked in behind Fenestraz on the Hangar Straight and made his pass into Stowe – although Fenestraz attempted to hang on around the outside, he had to give best and Ticktum instantly pulled out a two-second advantage.

A late full-course yellow – caused when a left-rear puncture sent Ralf Aron spinning into the gravel at Stowe – failed to unsettle Ticktum and he brought the car home for the win.

“When the top three drivers are all a very similar pace, it’s very difficult to overtake, as I proved,” said Ticktum, “but as Sacha’s tyres got relatively worse, mine stayed OK.

“My pass on Zhou was on the limit of everything – it was pretty good.

“Even my pass into Stowe on Sacha was a bit of a lunge as well – I had to make my opportunity count, and once I got in front it was all right.”

Aron’s puncture was the third for Prema Powerteam in the race, with first Mick Schumacher departing from fourth place, and then Zhou pitting from third – all deflations were at the left-rear.

That should have promoted Motopark man Aberdein to third, but he lost ground at the restart after the FCY, and Enaam Ahmed slipped through into third with his Hitech GP car.

Aberdein also lost a position to Motopark teammate Juri Vips, who moved up from 10th on the grid to finish fourth, and as he did so the South African launched himself over the kerb on the exit of Club before settling for fifth.

Pre-race championship leader Marcus Armstrong lost places in the opening corners in his Prema car, but progressed to sixth via a stunning outside pass on Hitech’s Alex Palou at Copse – Palou finished seventh.

Robert Shwartzman (Prema) held off Jehan Daruvala (Carlin) in the battle for eighth, while second-race poleman Fabio Scherer claimed the final point in his Motopark car.