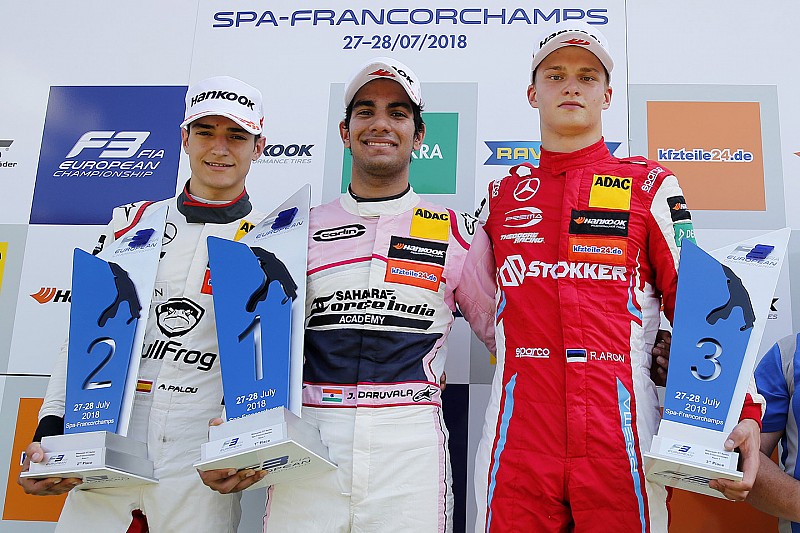 Force India Formula 1 protege Jehan Daruvala took the second Formula 3 European Championship win of his career – and his first of the season – in an incident-filled opening race of the Spa round.

Daruvala got a slow start from pole and lost out to front-row partner Marcus Armstrong and fast-starting Alex Palou, with pre-race championship leader Armstrong then sweeping around Palou into the lead.

But Ferrari junior Armstrong then lost the advantage to Palou at the exit of Raidillon, and Daruvala slipstreamed his way into second place.

Contact at La Source, when Nikita Troitskiy bumped into Sacha Fenestraz, left Troitskiy stranded on the outside of the turn with suspension damage, and the safety car was called out.

At the restart, Daruvala towed ahead of Palou on the Kemmel straight to take the lead.

Despite running a low-downforce single-plane rear wing, Hitech GP driver Palou could not complete a retaliation move on Daruvala’s Carlin Dallara-Volkswagen over the next couple of laps, and eventually the Mumbai racer pulled away as Palou’s tyres went off.

With a lap remaining Daruvala was over four seconds to the good, and crossed the line 3.235 seconds in front of Palou.

“I was running a bit more wing and tried to pull away in the middle sector,” said Daruvala. He stayed pretty close but then I started pulling away as he was losing grip.

“I didn’t push too much – I was saving my tyres in case the safety car came out.”

Ralf Aron moved into the championship lead by finishing third, after running sixth in the early laps.

An early fight for third between Prema Powerteam-run Ferrari junior Armstrong and impressive Hitech rookie Ben Hingeley ended when both collided at Les Combes. Armstrong suffered a puncture and eventually retired from the race, while Hingeley continued after getting a new front wing.

Aron passed Prema teammate Guan Yu Zhou on the first lap after the restart for what became third, with Zhou then also suffering a puncture and retiring to the pits.

But Aron had to survive an attack from the Hitech car of Enaam Ahmed – on the 13th lap of 15 they made contact on the Kemmel straight, Ahmed sustaining right-front suspension damage that forced him to the pits; although the stewards investigated the incident, no action was taken.

Aron had enough of a breathing space over Motopark-run Red Bull Junior Dan Ticktum to take the final podium spot, despite suspecting a puncture from his Ahmed collision.

Ticktum climbed the order from 13th on the grid, and pulled off a great move around the outside of Les Combes on Mick Schumacher to take what became fourth place.

Juri Vips grabbed seventh from fellow Motopark man Marino Sato on the final lap, the Estonian recovering from a clash with Jonathan Aberdein at Les Combes that resulted in Aberdein riding over his rear wheel and into retirement.