FIA Formula 3 European racer will leave open-wheel to take on a new challenge in 2014.

Sven Müller is going to contest the 2014 Porsche Carrera Cup Germany season as new ‘Porsche Junior’. In a challenging, multi-step selection procedure, the 21-year-old prevailed against young drivers from all over the world. Factors such as fitness, mental strength and understanding for technology were just as important as the collaboration with the engineers, consistent lap times over a race distance or the simulation of qualifying laps. 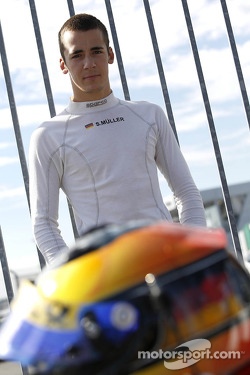 In the 2013 season, the German contested the FIA Formula 3 European championship and finished ninth. Only in September, the young talent switched from ma-con to the Dutch squad Van Amersfoort Racing and on the final race weekend of the season, he celebrated his first podium.

Müller will choose his race team for the Porsche Carrera Cup Germany himself. Porsche will provide him with €150.000 for his season budget.

“This a watershed in my career – and a major chance you aren’t offered too often, in a life as a racing driver,” said Sven Müller who is going to contest his first race with the 460bhp Porsche 911 GT3 Cup on 03rd May, 2014, at the Hockenheimring.

“I’m looking forward to my first Porsche Carrera Cup Germany season. I raced only karts and single-seaters, to date, but felt comfortable in the Cup-911 right from the start, nevertheless. I will give my very best to justify the trust put in me by Porsche with good performances.”