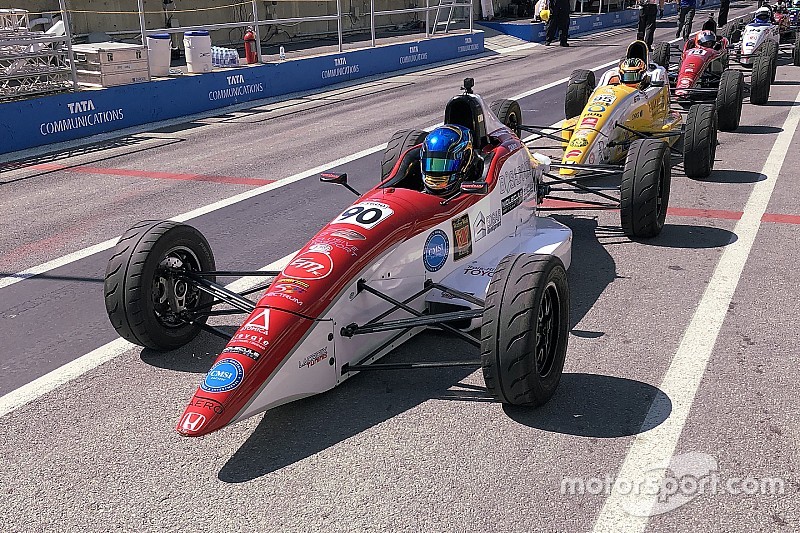 Veteran Didier Schraenen planted his Québec-built CMV on pole position for the first race of the meeting. North Vancouver, B.C.’s Kellen Ritter qualified second in a Honda-powered Spectrum of Exclusive Autosport. Jake Craig of Mission Viejo, CA (Piper Honda) lined up third on the grid with Matthew Taskinen of Calgary, Alberta alongside him in his Spectrum.

The field of 31 cars got going under bright skies and Schraenen negotiated the Senna corner in first place. At the end of Lap 2, Ritter passed him at the end of the long straightway of the Basin to take the lead.

Then, intense action developed for the eight first places with drivers passing and repassing each other in almost every corner. Out on front, Ritter and Schraenen fought furiously for the lead. However, Jake Craig caught the leading duo and managed to take second place from Schraenen.

At the end of Lap 9, Craig passed Ritter for the lead by outbraking him going into the last chicane. Three laps later, Ritter retook the lead. Meanwhile, Godin was making the most of his vast experience. He was running in fourth pace, but had to defend himself on the straights because of the inferior top speed of his Mygale

On the 14th and last lap, the two leaders ran side-by-side on the long straigthways and tried to go through the last chicane, still side-by-side. They touched slightly and Ritter emerged in first place and won the race ahead of Craig, Schraenen, Godin, Taskinen, Kohlbecker and Archambault.

The start of the second race saw Michel Bonnet benefit from a great getaway to take the lead as the field braked for the Senna corner. However, at the conclusion of the first lap, Archambault and Bonnet brushed wheels and spun, causing chaos behind them with Schraenen hitting the wall.

The safety car was called into action while Bonnet managed to get his slightly-impaired car going quickly and rejoined the field. All drivers involved were uninjured, but frustrated that their race had finished so suddenly. Very unfortunately, the two CMVs of Schraenen and Archambault had been quite a bit damaged in the accident.

During the last three laps, Ritter and Kohlbecker traded places on several occasions, but at the end, it was Ritter in first place followed by Kohlbecker, Craig, Kacic, Godin, Legrand, Bonnet (who made it to the finish) and Logan Cusson (Piper-Honda).