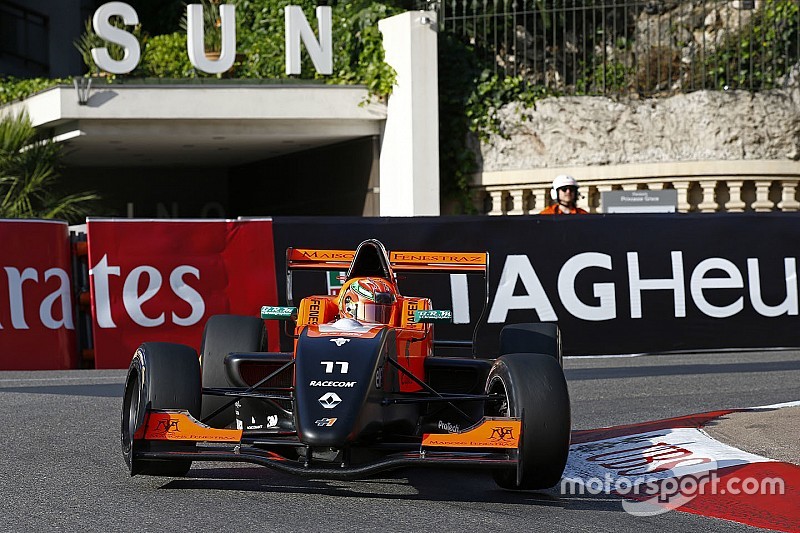 Eurocup Formula Renault rookie Sacha Fenestraz held on to take his first win in the category from pole position in the support race for the Monaco Grand Prix.

Fenestraz, who inherited pole after an exclusion for top qualifier Lando Norris and a penalty for Ferdinand Habsburg, kept it together in treacherous conditions to remain at the front when the race ended abruptly.

The start, delayed by more than 10 minutes due to barrier damage at Ste Devote after a crash in Porsche Supercup, was taken behind the safety car, the field doing two laps before the green flag was waved.

And after one lap of green-flag racing, in which Fenestraz held off Max Defourny, who was then passed Habsburg at Massenet, the safety car was back out.

The stoppage was caused by Bruno Baptista punting Jehan Daruvala into a spin with an optimistic move into the Nouvelle Chicane and, whereas Daruvala managed to continue despite dropping a number of places, Baptista retired with broken suspension.

The safety car period was then extended when David Porcelli, who had spun at Fairmont, lost his car on approach to Ste Devote while trying to catch up to the pack, spinning again and going into the barriers.

A restart was given at lap six, with Fenestraz pulling away as Habsburg came under pressure from Defourny but, instead, the latter surrendered the spot to former Lotus junior Dorian Boccolacci.

While no lasting damage was made to the barriers, the race was not restarted, Fenestraz - a winner of two Pau races in French F4 last year - picking up his third street-circuit triumph.

The results were provisionally rolled back to lap six, meaning that Habsburg and Defourny joined Fenestraz on the podium, with Boccolacci having to settle for fourth.

Force India junior Nikita Mazepin took fifth on his return to FR2.0, ahead of Scott, Henrique Chaves, Julien Falchero, Aubry and Will Palmer.

While he overtook a number of cars during the proceedings, Norris wound up classified only 18th.