In response to the rise in demand for esports entertainment, MAVTV Motorsports Network, the only cable television network in the U.S. dedicated solely to motorsports, has partnered with Motorsport Games, the team that brought you the 24 Hours of Le Mans Virtual to bring the highly popular eNASCAR Heat Pro League (eNHPL) to MAVTV viewers, starting June 21st.

All of the 12 eNHPL rounds will enjoy 90-minute race highlight shows on MAVTV throughout June, July, and August, bringing some of the best esports racing to motorsports enthusiasts throughout the country. eNHPL specials on MAVTV will feature additional commentary and competitor interviews highlighting the best in-race moments.

Live coverage of eNHPL events will continue on eNASCAR.com and Motorsport.tv, where the broadcast team of YouTube personality Russell Cox, NASCAR reporter and former racecar driver Hannah Newhouse and journalist Adam Mackey will be calling the action.

“Video game entertainment, specifically esports gaming, has gained mass popularity over the years,” stated John Duff, Head of Content, MAVTV. “Season 1 of the eNASCAR Heat Pro League was a huge success and we believe Season 2 will be just as popular, especially with the release of the new NASCAR Heat 5 video game coming later this year. Because of this, we’ve partnered with Motorsport Games to bring NASCAR fans of all ages the type of esports racing content they’ll be excited to watch.”

“State of the art graphics, combined with real-world competition during Season 1 of the eNASCAR Heat Pro League saw some of the best gamers go head-to-head, and brought throngs of viewers to our gaming broadcasts,” said Dmitry Kozko, CEO, Motorsport Games. “As NASCAR continues to lead the way to bring live sporting events back, and the release of the new NASCAR Heat 5 game coming soon, we anticipate the popularity of esports to continue growing. As the esports partner of choice for rights holders, it was a very natural fit for Motorsport Games to partner with MAVTV to bring all of this NASCAR excitement to dedicated motorsports enthusiasts throughout the United States.”

The eNASCAR Heat Pro League is the first-ever NASCAR esports league for video gaming consoles. The eNHPL season consists of three segments, with four races in each segment. Winners of each segment earn a spot in the Championship finale while, the final two championship contenders will be determined by a Wildcard race before the grand finale. In total, eight drivers will be eligible to compete for the 2020 eNASCAR Heat Pro League championship.

In Season 2 of the eNHPL, 28 of the best gamers once again represent prominent NASCAR race teams, including Hendrick Motorsports GC, Team Penske eSports, and Gibbs Gaming, to name just a few, as they compete against one another on the NASCAR Heat 4 platform for the chance to win over $200,000 in prize money. 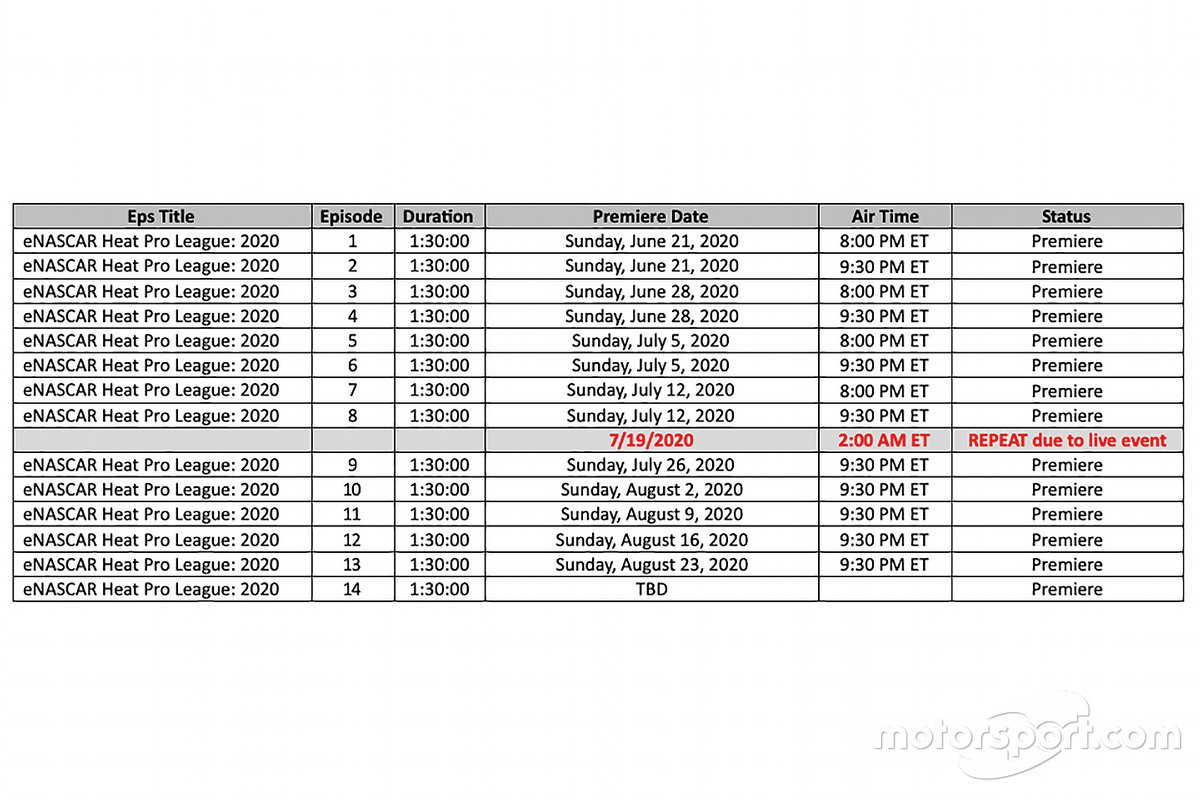 About Motorsport Games
Motorsport Games, part of the Motorsport Network, is dedicated to virtual racing. Our mission is to combine video game development with esports to deliver exciting, innovative experiences people will play, watch and engage with. We develop and publish console, PC and mobile video games, including the NASCAR Heat franchise, Officially Licensed by NASCAR. Motorsport Games is the esports partner of choice for many of the world’s leading motorsport rights holders, including NASCAR, Formula E, Le Mans and the FIA World Rallycross Championship and others.