On Sunday night, F1 Esports took centre stage as a cumulative peak audience of more than 600,000 across all platforms watched the Motorsport Games and Veloce co-produced #NottheBahGP and F1's official Virtual Grand Prix.

The two separate events, which treated fans to three online races around the Sakhir track, were likely the first time that many had tuned into an online sim racing event.

Having sat through the three hours of fun, here are the key things we took away from the evening's action.

Lando Norris is a shining light

There is no doubt that the star attraction from Sunday night's #NottheBahGP and Virtual Grand Prix was Lando Norris.

His on-track results may have been a disappointment, with a lap-one crash in the Veloce event and disconnects in the Virtual Grand Prix, leaving him unable to challenge for a podium spot.

But that did not stop him stealing the show as his Twitch channel (watched by more than 100,000 people) became a must-go place to be.

That was because rather than sulking about what happened, he phoned up his friends – including Max Verstappen, Carlos Sainz and Alex Albon – for some top banter that hands down won social media.

While Sunday night's action delivered a lot of fun, sim racing purists will not have been left impressed by everything they saw.

For example, the way that Johnny Herbert was able to blatantly cut the first corner in the Virtual Grand Prix to jump from 17th to first – before being brutally barged past later that lap – was not the sort of thing you'd expect from a serious top-level Esports event.

What was clear from watching is that F1 2019 is much more game than hardcore sim, which explains why online regulars like Max Verstappen and Lewis Hamilton who play on other platforms did not dive in.

That's not to say F1 2019 cannot deliver high-quality racing, as both Veloce races played out in a more pure fashion when the Esports professionals bossed things.

But with the platform on offer, there are limits to what can be expected as we look for alternatives to the absence of real F1 action. If we accept that this is more about entertainment than being a serious replacement, then all is good.

The spectacle needs its characters

Up until now, there has not been that much crossover between the world of sim racers and the real racing world. They have kind of operated in parallel.

While F1 stars like Max Verstappen and Lando Norris regularly strut their stuff online, and Igor Fraga has made the successful transition the other way, they are the exception rather than the rule.

One of the big pushes that needs to be made over the next few weeks is showcasing the Esports stars to the wider racing world. We need to appreciate their brilliance.

Esports certainly has a golden opportunity right now to grab the spotlight. The popularity of the #NottheBahGP comes on the back of an exciting strategic partnership with Motorsport Games to develop the series.

Motorsport Games has already shown its success in delivering the Le Mans Esports Series and eNASCAR Heat Pro League, as it moves to ensure Esports fills the void left by the cancellation of real world events.

That opportunity for greater focus is true of the drivers too. Top sim racers like Daniel Bereznay and Cem Bolukbasi, who won the two #NottheBahGP events, were likely unknown to many F1 fans who tuned in for the first time. So it's important that a big effort is made in getting their names and characters across.

Racing fans need to come to better understand the high level they are operating at, and the online racing will be better if there is a good mix of top line real racers and sim professionals that we all know.

Maybe forcing teams to run a Pro-Am set-up (with the real F1 stars as the Amateur) would be one way of ensuring there is the right mix of racing talent there.

While Lando Norris' antics on Twitch were amusing, and everyone laughed at the progress of his AI LandoBot, they only came about because he had been disconnected from the game server.

For a top line event like the Virtual Grand Prix, where Norris was expected to be one of the stars of the show, it was pretty inexcusable that he was effectively out of the equation before he had completed a single qualifying or racing lap. Anthony Davidson also found himself disconnected and racing against AI opposition only, only finding out when he finished the original full distance race.

Of course, one of the downsides of online racing is that disconnects do happen occasionally – and we've all experienced the heartbreak of it happening – but to have it happen twice to Norris in a short space of time needs to be avoided.

Sure his Twitch channel may not have been as much fun if he had been driving all the time and not phoning up his mates, but we would all much prefer to watch him battling it out there on track.

We all need some racing in our lives 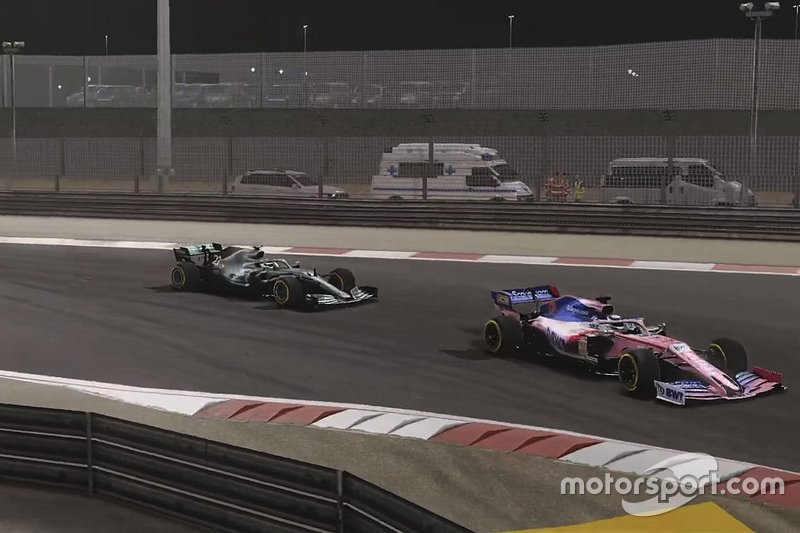 The biggest positive from the two events was that for three hours on Sunday night, Formula 1 and sim racing fans were finally able to switch off from the bombardment of coronavirus news that has gripped the world for weeks.

With many of us having lives dictated by the ebb and flow of the real motorsport calendar, the growing likelihood of being robbed of track action for many months to come has been hard to comprehend. And racing is something that we are all going to miss.

While the wider world's talk of self isolation and lockdowns are far more important than undercuts and overtaking in the grand scheme of things, being able to switch off for a bit and be entertained by some virtual wheel-to-wheel action has a value for lifting spirits and bringing all the racing community back together.

Both Veloce and F1 should be applauded for putting the smile back on many people's faces during these difficult times.