With sales of 80 million games since it was first launched back in 1997 - making it the biggest-selling Sony PlayStation franchise - Gran Turismo has become an icon for sim racers worldwide.

As its latest incarnation GT Sport continues to introduce a new generation of fans to racing, the importance of the game in the bigger motorsport landscape should not be underestimated.

For with Esports on the march as more and more people get drawn to online racing and arena competitions, sim racing has moved away from the domain of teenagers in dark bedrooms to now becoming big business.

Gran Turismo creator Kazunori Yamauchi goes further than that though. He has absolutely no doubt that the effort and focus he and his Polyphony Digital studio have made to position Gran Turismo and sim racing in the spotlight is an important crusade in actually saving motorsport.

For with the costs of entry to real motor racing so high, without sim racing there could be a danger of a whole young generation never getting a chance to experience racing behind the wheel. Looking at it from that view point, Esports is not there to replace motorsport. It's there to help it.

Speaking to Motorsport.com in an exclusive interview, Yamauchi is clear of the role that the booming interest in sim racing is playing.

"This is something that that we need to do to ensure the survival of motorsports in the future," he says. "This activity, all the different things that we're doing, is something that's necessary to keep it going.

"It's not like we're working to defeat or exceed the current existing motorsports. This is all a part of the effort to keep it going and make it something that's everlasting."

He adds: "For example, how many friends did you have in school that race karts? It's a limited number.

"But there are millions of people in the world that play Gran Turismo. They learn the real driving techniques and they learn about the real mechanics behind a car, and every night they're having strategic races online with others. And for sure, I think some of those guys doing that as they're growing up will enter real motorsport in their lives." 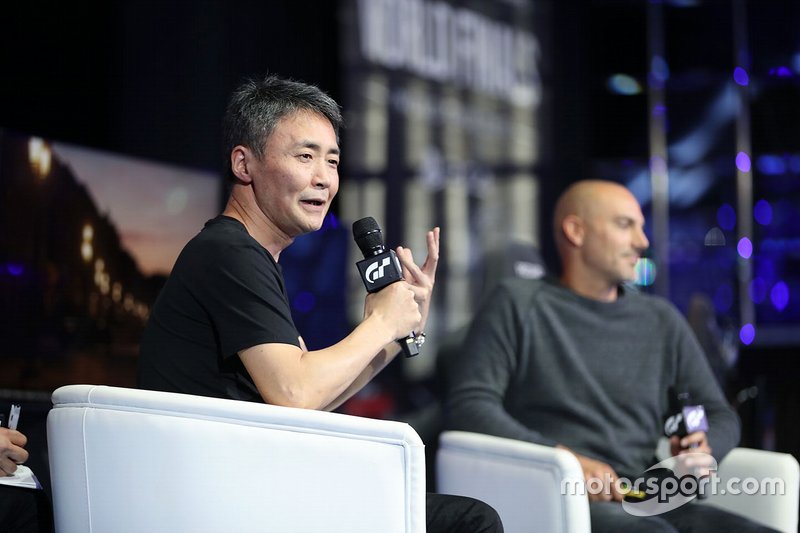 Yamauchi says that motor racing has gone through some very defined eras over the last few decades, where the barriers of entry that were open for everybody a few decades ago have started to close. It's important to him that they remain as open as possible.

"Motorsports has a history of about 150 years now," he explains. "Originally it was a sport for the higher class basically, and that age lasted for quite a while. But I think it was probably in the 1970's that the doors to motorsports started opening to regular people around the world. And that was the beginning of a time, a special time, where just placing stickers on the car brought in millions of commercial money that could be used.

"But I don't think that those doors were open for very long. I think by the 1990's that door was starting to close. So in the 150 years of motorsport's history, I think there were those 20 years which were a very exceptional time and were very different.

"If you watch Le Mans today, you see that the number of gentlemen drivers is huge. And you look at the world of single-seater racing, it's a world where unless you have a lot of money to begin with, you can't do it. So I think motorsports has sort of gone back to that era where it's only open to a select few people in higher society.

"Fortunately, I've come to know to know how special and how great racing and motorsports is. But looking at it now, I feel that if left alone, motor sports could really go back into the era where normal people would never be involved in it.

"And I don't think that's a good thing. That's why I created Gran Turismo Sport, where you could race for years with a cost of maybe one set of tyres." 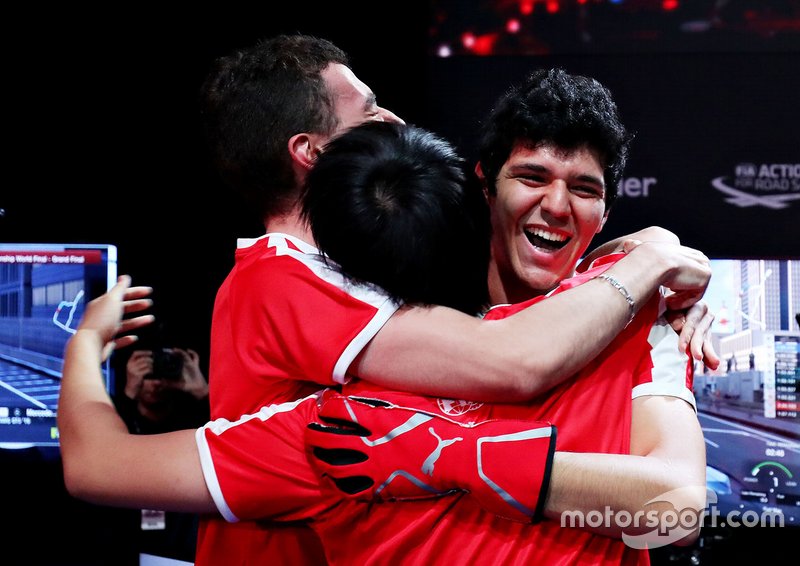 One good example of how Gran Turismo is helping comes from young Brazilian Igor Fraga (above). The current leader of the Toyota Racing Series, who has just signed a deal to join Charouz in European F3, is a Gran Turismo champion who kept his career alive online when he was forced to take a break from real racing.

Yamauchi is a fascinating man to speak to, and his responses – through his translator – come after much thought as he takes time to fully explain his feelings. He is a clear visionary, who even suggests that Gran Turismo's success is down simply to the game originally being so 'ordinary'.

"Nowadays, of course, there are other driving simulators, and that has sort of become the standard in the world. But I think at the time that we were creating, Gran Turismo, that wasn't the case and we were really able to create something that is the standard and that is what people expect.

"It's not easy to create something that would be the standard. It's not something that you could just come out of the blue and create, and I think we're lucky in that when we first started working on Gran Turismo that we were able to do that

"But when when you do achieve and create something that's truly creative, when you look back on it to later on, in the future, it sort of becomes the ordinary and the standard.

"It's like the Beatles: they created pop music, popular music and to us now nowadays, pop music is normal. Yes, it is a standard. But if the Beatles didn't come around, we might not have pop music. And I think that's the truth about something that's truly creative."

With his clear view about the mission Gran Turismo has to secure a long-term future for online racing, Yamauchi is as committed as he always was to his job in hand despite having spent 20 years on the same project. 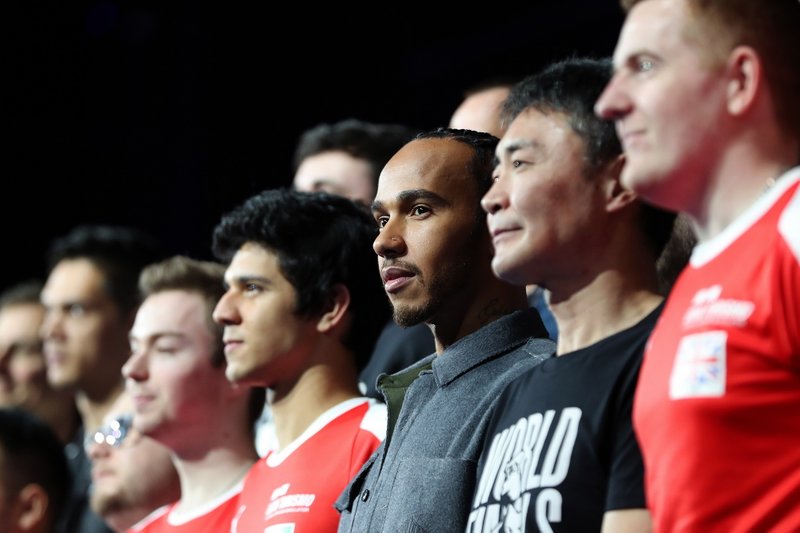 "I think we're at an age where in motorsports, it can go back to being what it was," he said "We're still in that part of that exceptional period, in terms of it being open to the public and more people. But that's something that we have to think about, to keep motorsports as popular as it is now.

"It's something that we need to work on to keep being popular. And that's also why the automobile manufacturers are getting involved and showing us their support as well, because they realise that we're at this critical point in time where we could lose the interest of the public in terms of how popular motor sports can be."

But there's also another fascinating dynamic that games like Gran Turismo can offer. In a world where screaming V8s will never return to F1 cars, and questions will soon emerge about combustion engines on tracks, the future generation of fans may never be able to experience in the real world the noise and emotion that super loud engines bring.

However, in the digital form, there are no rules: the engines can be as loud and the cars as crazy as they ever were.

"In the future maybe when we look back, we might look at it more as a museum of experiences of the past," adds Yamauchi.

"In the Tokyo World Tour event [last year], we had a race with 1980s type F1 cars. They had 1500 cc turbocharged engines that were screaming. So we had these crazy cars that we can't race with any more in real life…." 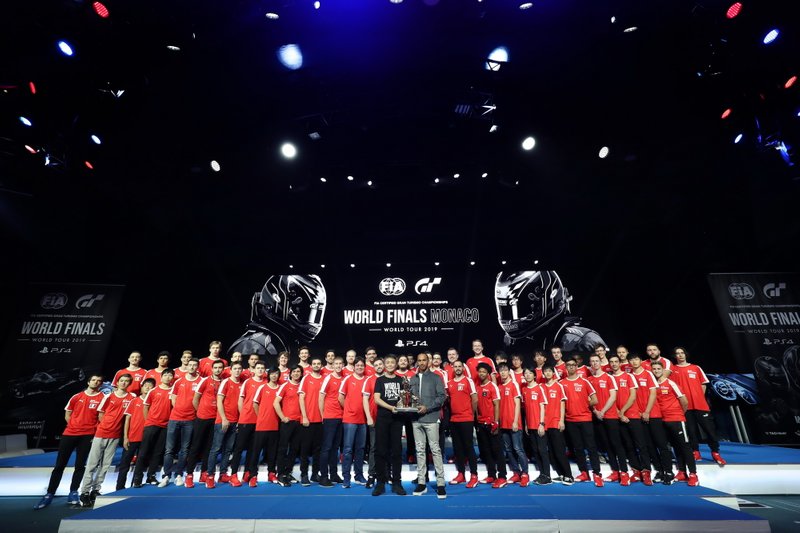 Formula 1 Driver, Lewis Hamilton and producer of Gran Turismo, Kazunori Yamauchi pose for a photo on stage with the competitors