Scott McLaughlin led Will Power in a Team Penske-Chevrolet 1-2 at a virtual Barber Motorsports Park, after perfect execution of a two-stop race in the second round of the IndyCar iRacing Challenge. 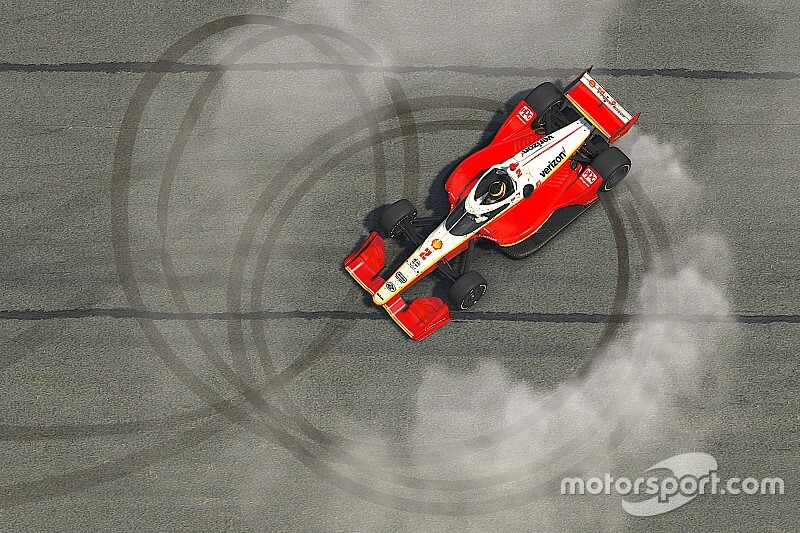 On the opening lap of the 29-car, 45-lap Honda Indy Grand Prix of Alabama, polesitter and last week’s Watkins Glen winner Sage Karam sent his Dreyer & Reinbold Racing Chevrolet into the lead ahead of Power who held off Chip Ganassi Racing-Honda’s Felix Rosenqvist.

Alex Palou in the Dale Coyne Racing-Honda and Scott Speed’s Andretti Autosport-Honda entry followed in fourth and fifth, but poor Simon Pagenaud swerved to avoid his sideways Penske teammate, Scott McLaughlin at Turn 5, and lost momentum that allowed another teammate, Josef Newgarden, to nip through into sixth.

Once Graham Rahal had damaged his front wing with a wild moment on the grass, Scott Dixon in the second Ganassi car moved into ninth ahead of Colton Herta, although their positions switched before a dozen laps was up. They were then promoted a spot when Speed collided with Newgarden and spun into the mid-pack.

McLaughlin pitted at the end of Lap 13, before the first competition yellow which was called on Lap 15.

The field got the green again on Lap 19 and Karam was flawless, while Power had to watch his mirrors for Rosenqvist, who’d been given an easy time since Palou was caught up behind the lapped Alexander Rossi.

Power pitted on Lap 23, mid-distance, after pulling away from Rosenqvist when the Swede made a mistake at the final turn. Karam and Rosenqvist left it until Lap 27 to make their stops, and Rosenqvist emerged ahead. However, he and Karam and collided at the Turn 7 chicane, spinning the Ganassi driver (who would soon spin again) and delaying Karam. The Watkins Glen winner didn’t get away free, however, as he was assessed a drive-through penalty for speeding in the pits.

Up front, McLaughlin was in the lead thanks to his early stop but he hadn’t been saving fuel but instead charging with the intention of making a second stop, which came with 14 laps to go. He emerged in third, ahead of teammate Power, and the pair of them started closing down on desperately fuel-saving leader Speed, although initially their efforts were harmed by backmarkers.

Speed, who was saving fuel, ran wide at Turn 2 and lost momentum with six laps to go leaving McLaughlin and Power to fight for the win. Each of them were strong at different parts of the track, but ultimately McLaughlin held on to clinch victory by 0.418sec.

Speed fended off Palou, Pagenaud and the recovering Rosenqvist to claim third, while Herta was a distant seventh.

The ever-remarkable Robert Wickens, using Simcraft setup with hand controls for throttle and brake, claimed eighth despite at one point being knocked into the distant yonder by one of his teammates. Newgarden and Santino Ferrucci (Dale Coyne Racing with Vasser-Sullivan) completed the Top 10.

At the end of the NBCSN TV broadcast it was revealed that next week's race will be at Michigan International Speedway.