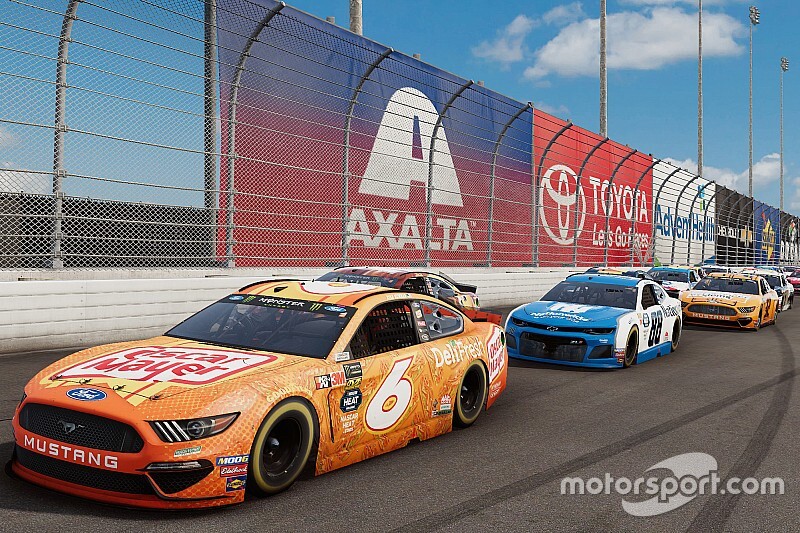 Both races were 50 laps in length with the PS4 drivers getting out on track first. Tyler Reddick and Kaz Grala also joined the field for the special event.

NJobes25, FlashNine and SmokeFan14_B20 controlled the race throughout an early flurry of cautions, trading the lead amongst themselves.

Just before halfway, FlashNine and SmokeFan14_B20 came down pit road for their first stop of the race. NJobes25 followed suit three laps later. As green-flag pit stops cycled through, Stewart-Haas driver SmokeFan14_B20 emerged with the lead.

With less than 10 laps remaining, it became apparent that none of our top runners had enough fuel to go the distance and would be forced to make an additional stop. SmokeFan and is SHR teammate FlashNine ducked down pit lane first with nine laps to go. Hendrick No. 24 driver NJobes25 continued to lead until he too had to pit with five laps remaining.

Brandon Hanna and the No. 95 machine moved into the top spot, but he would be overtaken by itsyourbrochase6 (Chase Williamson) with jus two laps remaining. He then drove off, beating MaxBoost27 to the line by 3.6 seconds.

Hanna was third, 6.4 seconds behind.

Rocket5x took the early lead in the Xbox race, which was plagued by several wrecks.  mrTRACKBAR33 was lurking close behind and the two drivers worked together to get away from the rest of the field and the chaos behind them.

They controlled the majority of the race and pitted from first and second with under ten laps remaining. wowTHATSgarbage (Nicholas Walker) in the No. 6 Roush-Fenway machine inherited the top spot and with an alternate fuel strategy, tried to go the distance and steal the win.

Although some behind him did not, Walker was able to go the distance and win the race by a massive 11.5 second margin over Baner958816 with LuckyDog385 third.