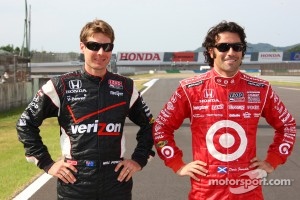 Burbank, Calif. Dec 6, 2011 - - As the national motorsports professionals association has done since 1970, the American Auto Racing Writers & Broadcasters Association has announced its annual "All America Team".

Unique in all of motorsports reporting, members of "AARWBA" each year elect a special team of drivers who represent the broad spectrum of professional motorsports. AARWBA then bring them all together at a gala dinner gathering where each is presented with the organization's coveted "Horsepower" trophy which symbolizes top performance in each category.

AARWBA members across the country vote on drivers by the specific category of racing which they participate in and two drivers from each of the disciplines are elected to the first team. 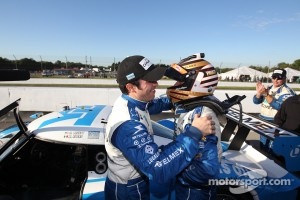 In the Open Wheel Division, Dario Franchitti and Will Power were the choices of the membership. Driving for Target/Chip Ganassi Racing, Fanchitti three-peated as IZOD Indy Car Series Champion this year, and Verizon's Team Penske's Will Power sat pole eleven times and won six races in the series on the way to his second place in 2011 points for the open wheelers.

Bryan Clauson joins the All-America Team (Short Track Division) on the basis of his twin consecutive USAC National Drivers Championships and back-to-back Mopar National Midget crowns. Clauson drives every style of open wheel short track machine that USAC sanctions and has a winning record in all of them. Kyle Larson also drives them all from Silver Crown to Midgets and did something that made everyone in the business stand up and take notice this year: he entered and swept all three USAC racing divisions at the 4-Crown Nationals at Eldora Speedway on September 24, 2011! 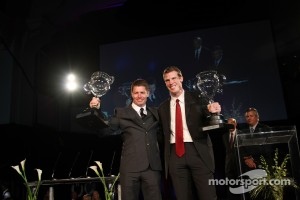 There was simply no way to separate these two All-America Team members who make up the first team in the Stock Car category during the last few races of the NASCAR Sprint Cup Chase. In fact, Tony Stewart and Carl Edwards finished the season with identical points totals, Stewart's win record being the deciding factor in his winning a third NASCAR driver's championship. Edwards was right there, racing Stewart and the other 41 drivers as hard as he could every race. (In the end, the wins "won" as many folks think they should.)

Del Worsham and Matt Hagan are the very worthy representatives of the Drag Racing Category. Popular veteran Worsham won his first NHRA Full Throttle Top Fuel world championship, the former Funny Car driver got it right in his first year out of the floppers in the Al-Anabi Racing Dragster. Hagan, on the other hand, drove his DieHard Dodge Charger Funny Car to a hard-earned championship that saw him win it in the last few rounds of the season, a much-preferred alternative to 2010 when he lost the same title in the last day of the final event. 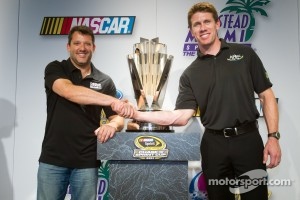 In the Touring Series voting Austin Dillon got the nod for being a big winner in a very tough division this year, the NASCAR Camping World Truck Series. Driving the Bass Pro Shops Chevy for Richard Childress, Dillion became the youngest-ever Champion at the age of 21. And … Andrew Davis and Leh Keen teamed up to win the 2011 Rolex Grand Am Series /GT Class driving for A. Dano Davis (Brumos), together they won the Glen 6 Hour, and the event at Mazda Raceway in Laguna Seca.

Josef Newgarden and Patrick Long both join this year's team in the At Large category. Newgarden is the 2011 Firestone Indy Lights champion winning five races and grabbing three poles over the season. He was also named the Perkin Elmer Rookie of the Year in the same division. His five wins in 2011 were the most by any driver in his series. Long won his first Pirelli World Challenge Driver's Championship in fine style with four wins and four poles in the hotly- contested series. His championship is just that little bit more special because he had to miss one series race to test for the factory Porsche team at Le Mans.

Sportscar specialist Amy Ruman will get AARWBA's "Rising Star" award in Indy for her work behind the wheel of the McNichols/Goodyear/Cenweld Corvette. The first woman ever to win a Trans Am race, Ruman finished third in the 2011 points in the hardtops and, along with her season finale win, was on three podiums during the SCCA Trans Am season.

One other tradition that AARWBA has followed as a long-standing tradition is to elect a Second Team to be honored along with the above All-America winners. Here are the categories and names of that illustrious group of drivers: 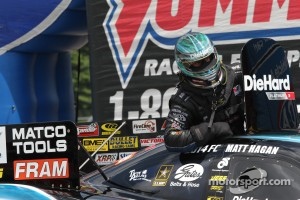 In addition to their individual AARWBA "Horsepower" Trophy, the individual driver who garners the greatest number of All-America Team votes will also have the honor of having their name inscribed on the Jerry Titus Award, marking that person as AARWBA's Driver Of The Year.

The unusual perpetual trophy is comprised of Jerry Titus' personal (manual) typewriter and crowned by his racing helmet. Titus, was both a professional driver and a top motorsports journalist, and a person who epitomised the very best of both pursuits.

A Trans Am Champion, Titus raced for the legendary Carroll Shelby. Saddly he was lost in a racing accident at Road America in 1969, but his memory as "A Driver who could realy write ..." or "A Writer who could really drive..." is something that AARWBA members have, over the years, fashioned into a lasting tribute to a very special person.

Unlike the already-known 2011 AARWBA All-America Team members, the announcement of the annual Titus Award Winner is not made in advance of the Awards ceremony and thus has become one of the true high points of that special Winter evening. … Quite an honor roll, and the only such voted-on group that brings together champions from virtually every form of top professional motoracing in this country.

Perhaps the best part of the whole evening is the sort of personal interchange that these champions from such widely-divergent branches of the sport have with each other. 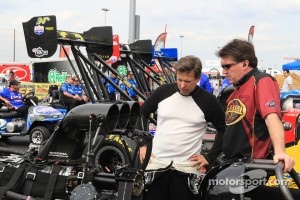 This year's forty-second edition of the All-American Team Banquet will be held on Sunday evening January 8, 2012 in the beautiful Grand Hall at the Train Station at the Crowne Plaza Hotel, Indianapolis, Indiana.

The AARWBA Banquet is thought to be to only major motorsports awards presentation that is made open to public attendance. "We've always invited motorsports fans to join with us in honoring these great drivers each year," said AARWBA President, Dusty Brandel. "It's become a wonderful tradition at our annual recognition banquet for fans to be able to attend right along with our professional members, our honored guests along with members of their teams, and dignitaries from the sanctioning organizations."

Tickets for the 2012 All America Team Banquet in Indianapolis are on sale now at: www.aarwba.org

Founded in 1955 AARWBA is a motorsports organization comprised of writers, broadcasters, photographers, and other media-related professionals. The organization's charter is aimed at providing not only proper recognition for members of the motorsports media, but to recognize their work as well as the work of the competitors that they follow in print, on the air, and on film.

Morbidelli: Yamaha “didn’t owe me” factory MotoGP status, but I deserve it

Newgarden: IndyCar driver aggression over the edge at times

Morbidelli: Yamaha “didn’t owe me” factory MotoGP status, but I deserve it