Promoted: Graduate and aspiring motorsport engineer Roberto Marino gives us a real insight into what it is like when you are trying to get that first step into motorsport. Adam Arbon spoke to him...

Roberto studied Automotive Engineering with Motorsport at the UK's University of Hertfordshire, gaining valuable engineering knowledge and hands-on experience. He applied for a placement but unfortunately failed to find a place after just missing out. 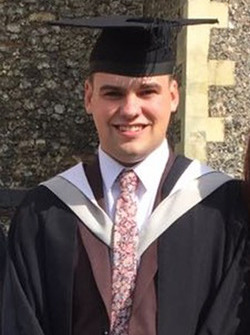 His final year project was to design and develop an electrically-actuated clutch for the university’s Formula Student entry. He mapped the system into the ECU and ran tests on the servo, which connected to the clutch arm on a spare engine.

Then he created the bracket to attach the servo on the chassis and a clutch paddle which with a potentiometer could be mounted behind the steering wheel, in a similar fashion to F1.

Roberto is the perfect example of a well-educated graduate struggling to get his foot in the door in the motorsport industry, and is in a similar position to many who are keen to break into employment in the sector.

We sat down with Roberto, to discuss some of the pressing issues he has had when trying to get a job in motorsport...

What are your experiences of finding a job in motorsport?

“For me it's been very tough, I think a lack of experience in the sector is a big downfall of mine. I try to show the passion and drive to work as much as possible to make up for it but it seems it isn't enough.

“I must have applied for a good 100 jobs and contacted most of the UK-based teams across most forms of motorsport. I've asked for part time work as a weekend warrior and the opportunity of shadowing an engineer but to no avail. Hopefully one team takes a chance on me and I can start gaining experience and work.”

How do you think motorsport companies can help graduates?

“I know many teams don't have the money to employ an unproven graduate or offer work placements. They run slick operations and having a blank canvas around doesn't help in some situations.

“However, I use the example of Max Verstappen and Red Bull employing him off-one season in Formula 3 where he finished third, he showed a flare without the track record and is now one of the most respected and talented drivers on the Formula 1 grid.

“So, I guess if teams took a chance on engineers coming out of university or maybe had partnerships with universities they could offer placements and help mould the type of engineer they would employ and having an input into their learning.”

Why do you want a job in motorsport?

“I see motorsport as more than a job and more than a sport, it’s a way of life. From a very young age Sundays were about sitting down with my dad and watching Formula 1.

“As I grew up I learnt more about different forms of motorsport and the variety of ways people make cars go fast and on different surfaces. Visiting a Formula 1 race weekend and Le Mans further cemented the way of life I wanted to follow.

“The passion for motorsport grew and grew and I took subjects that showed an engineering background and then selected a university with a motorsport course and a good engineering pedigree.”

Would you consider using Motorsport Jobs? And why?

“So, I am already signed up on Motorsport Jobs and actively look on the site to find jobs and apply, fingers crossed something comes out of it.

“Many teams advertise jobs through the site and it’s not just UK based which is a bonus as I am prepared to go wherever to follow my dream job.”

Opinion: The need to bring more Asian races to India