Ingram's Flat Spot On Atlanta's High Banks Get Trimmed by Jonathan Ingram This year's Labor Day weekend race at the Atlanta Motor Speedway predictably produced another belly-to-the-ground, flat-out scramble that would have made Fireball Roberts, ...

This year's Labor Day weekend race at the Atlanta Motor Speedway predictably produced another belly-to-the-ground, flat-out scramble that would have made Fireball Roberts, the first winner on the same high banks in 1960, proud. But that won't prevent a racer's track that has produced more than its fair share of close finishes over the last 50 years without plates on the carburetors from losing its spring date on next year's Sprint Cup calendar. 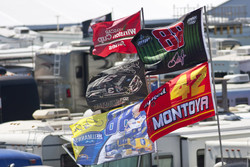 "This has been kind of a heartbreak race for these fans in Atlanta, knowing they're going to lose a race next year," said winner Tony Stewart after climbing from his Old Spice Chevy after breaking his 31-race losing streak. "But man, I've never been so happy to win a race in my life."

When it comes to Atlanta's date in March being moved to a July race next year in Kentucky, there's plenty of blame to go around. Fans didn't support the spring race well enough once the track was built -- some would say overbuilt -- to its current capacity. The owner, Bruton Smith, elected to move one of his Atlanta dates to Kentucky, a track he bought at a discount. The owners of NASCAR, who also own the nearby competing tracks of Daytona and Talladega, refused to consider changing the spring date in Atlanta to more predictable weather, the kind that fans could bank on.

A calendar change, of course, could have been done years ago, among other things, by moving the Phoenix race located in the Arizona desert ahead of Atlanta on the calendar. This is the same Phoenix race that was, in fact, moved to February for the 2011 season. That's too late to push back Atlanta's predictably cold and wet -- and sometimes snowy -- early March date.

Just under a decade ago, in the very first year that realignment was announced during the NASCAR Media Tour, a gruff and pointed Bill France Jr., at the time the chairman of both NASCAR and the International Speedway Corporation, singled out Atlanta as a good candidate to lose a date. "From what I hear, they're not selling enough tickets in Atlanta," he said in extraordinary off-the-cuff remarks in front of the entire media corps -- after interrupting son Brian France -- during a visit to the NASCAR Research and Development facility. 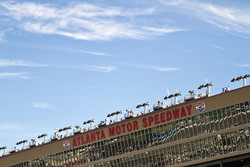 In effect, the flagship tracks of Smith's Speedway Motorsports, Inc. and ISC have survived the realignment with all their dates intact and the other tracks within those areas in the Deep South have either lost both dates (North Wilkesboro and Rockingham) or one date (Darlington and Atlanta).

The irony, of course, is the fact that the builders of the track now known as the Kentucky Motor Speedway took a questionable legal route while pursuing a Sprint Cup date and lost in court. Then they lost the track to Smith.

Another irony concerns the fact Atlanta is home to more Fortune 500 companies involved in NASCAR than any other locale hosting Sprint Cup events. But Cincinnati, relatively close to the Kentucky track, can be seen as the home to more potential candidates for sponsorship.

While we're at it, the sponsors and TV folks should also be mentioned as culprits in the deconstructing and rearrangement of stock car racing's privately-owned major league. The major national sponsors want exposure in a variety of markets and a schedule that is not necessarily saturated in the Southeast. The TV networks who pay 10-figure sums for the rights to telecast events also want to see NASCAR expand into more major metropolitan areas, which theoretically helps expand the number of TV viewers.

As any observer can tell you, none of these grand schemes are working very well at present. NASCAR and ISC were rebuffed in the state of Washington and in the city of New York when it came to building new tracks. The cookie cutter 1.5-mile track in Chicagoland was moved into the first Chase for the NASCAR Sprint Cup date to help boost attendance -- as well as attention to the Chase. The date moved from Rockingham to the Inland Empire near Los Angeles and the Auto Club Speedway in 2001, will move next year to Kansas City -- which has yet to prove it can handle a second date. It remains to be seen if the Texas Motor Speedway can take full advantage of a second date during the Chase. 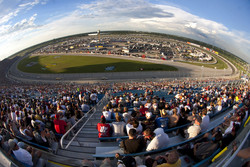 The changes on and off the track concern trying to engage a different kind of fan and expand the fan base beyond the current loyal following. The idea seems to be to bring in fans who are not necessarily attracted by drivers cheating death and more interested in a family-oriented sport that doesn't promote violence or foul language. Nobody can argue with a strategy like this in principle.

If major league stock car racing was all image, smoke and mirrors, maybe this would make complete sense. But if the people in charge of these decisions recognized the values of honor, courage, independence, bravery, defiance, hard work, loyalty and sacrifice that built the tracks in the Southeast, perhaps they'd understand how to promote the sport in other climes where surely such values would be appreciated.

So far, they've stumbled badly in terms of ticket sales and TV figures since the realignment began in earnest in 2004. If they're going to take stock car racing out of the South, at least they could figure out what they're moving, not the least of which is door-to-door racing.

Just recently there was an announcement about the reorganization of NASCAR's communications department. The announcement was so full of jargon it was almost impossible to comprehend. Taking dates from great race tracks doesn't make much sense, either.

Jonathan Ingram can be reached at jonathan@jingrambooks.com.

Formula One - On and Off track week 36

Tackling the hidden weakness of hybrid powertrains with Liqui Moly