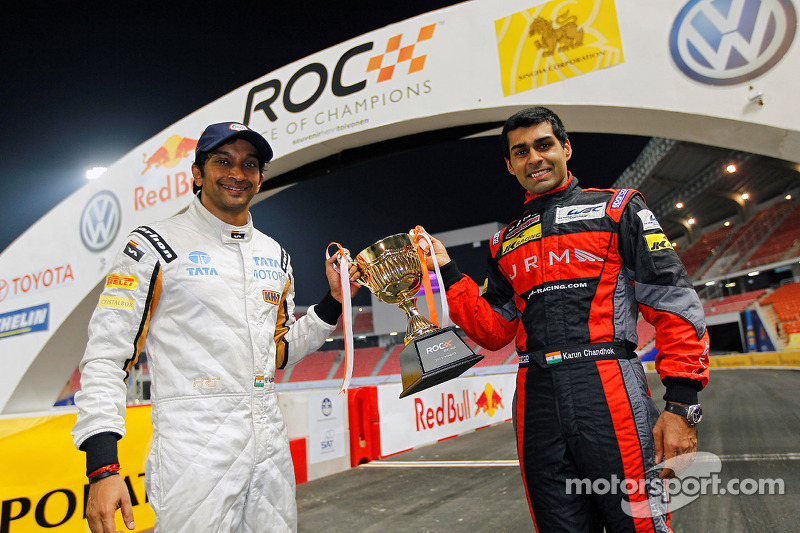 Team India's Narain Karthikeyan and Karun Chandhok are celebrating tonight after they took glory in the inaugural ROC Asia competition, the first night of action of the 2012 Race Of Champions weekend.

On a hot evening at Bangkok's Rajamangala Stadium, Narain Karthikeyan and Karun Chandhok joined forces for Team India as both made their ROC debuts. The Indian duo topped the group stage with four wins out of six to go into the final as favourites.

It’s a bit of history for Team India to win the first ROC Asia.

There they faced Toyota Team Gazoo Japan, who were represented by Kazuya Ohshima and Takuto Iguchi, who were both class winners in this year's Nürburgring 24-Hour race. In the end the Indian duo prevailed, both winning their heats to take the title.

Chandhok said: “That was a really good night and it was obviously very nice to end up on top. It wasn’t as straightforward as we would have hoped as we both had our favourite cars and we ended up driving the opposite ones to what we wanted. But it worked out well in the end. It was a lot of fun and we really enjoyed our first experience of competing here. In the end I think we beat everyone fair and square. That’s what the Race Of Champions all about – same cars, same track, same conditions. It’s a bit of history for Team India to win the first ROC Asia. That’s obviously very special. Now we start from scratch again tomorrow.”

Karthikeyan added: “This is the first time at the Race Of Champions for both myself and Karun and I’ve really enjoyed this event so far. It’s a unique format and it’s pretty tight and narrow out there. So it was a challenge to put a precise lap together in any of the cars. But it’s just about getting the best out of each car. You need to adapt very quickly without any mistakes as you need a clean lap. We’re happy to come out on top, now we can look forward to the rest of the event. We’re up for the challenge and we’ll take on the world tomorrow!”

The performance earns Team India a place in tomorrow's ROC Nations Cup along with Team Thailand, who qualify as host nation. The home team were unlucky not to make it through to the final after they took three wins in the group stage, the same as finalists Toyota Team Gazoo Japan. 2010 Supercar Thailand Champ Nattavude Charoensukawattana and touring car ace Tin Sritrai both thrilled their home crowd with victories but they missed out on the countback of the fastest times.

Team China paired F1 test driver Ho-Pin Tung with rally ace Han Han, better known as the world's most widely-read blogger. The Chinese pair already had Race Of Champions experience as they competed in the 2009 event at Beijing's 'Bird's Nest' Olympic Stadium, getting as far as the semi-finals of the ROC Nations Cup. But there was no repeat this time as they were knocked out despite taking one win apiece.

Charoensukawattana and Sritrai progressed to the final, with 49-year-old Bangkok resident Charoensukawattana coming out on top. Those results earned both finalists the honour of representing Team Thailand in ROC Asia along with Saturday's ROC Nations Cup and Sunday's individual Race Of Champions.

Charoensukawattana said: "It was a great race today and I would like to thank all my fans because their support was powerful. My experience helped but what was most important was that I didn't make any mistakes. This is the first time we've had this event in Thailand and I hope it will come back next year too. If I have another opportunity next year I will definitely come here again."

ROC 2012 continues in Bangkok for the rest of the weekend with a dazzling line-up of motor sport stars including Formula 1 world champions Michael Schumacher and Sebastian Vettel plus MotoGP world champions Mick Doohan and Jorge Lorenzo.

Coverage of Saturday’s ROC Nations Cup and Sunday’s Race Of Champions will be available on television all over the world. Stations showing ROC live include SAT1 in Germany, Motors TV throughout Europe, Al Jazeera in the Middle East, Fox in Latin America and Brazil, Speed TV in Australia, the Sony Entertainment Network in India, PPTV and Euro Soccer channel in China, Super Sport in Africa plus many more. Please check local listings for exact details of broadcast times.

Tickets are still available for this weekend’s action.

Motor sport legends ready for the Race Of Champions