As the broadcast industry pivots increasingly towards Direct to Consumer, Motorsport.tv is emerging as the destination for the Network’s 56 million monthly highly engaged users to find content feeding their passion for motorsport and automotive.

There are some powerful global trends underpinning this direct to consumer shift, such as the growing popularity for connected TV, the proliferation of high-speed internet and 5g, consumers’ growing appetite for content-rich applications, and also high levels of personalization

This is an extract of James’ address to the Tech Innovation Forum.

Well, we have a whole bunch of live streams, roundabout 1,000 of them a year. And we also have significant amounts of on-demand content; at the moment have about 1,200 individual programs on there, 5,000 hours of quality on-demand content. And they're predominantly archive material. Motorsport is a sport that has a strong connection with its history. So there's a lot of legendary drivers and Senna, Prost, Mansell. The entire history of Le Mans 24 hours, for example, is all there on the channel. It's a sport where a lot of people, whilst engaging with the racing of today, very much enjoy looking back at some of the great races of the past. That's an important part of the offering. What we've also been building in the last few months are partner channels. So we've got official channels with Ferrari, Mercedes, Audi Sport, Lamborghini, NASCAR, FIA World Rally, British Touring Car Championships among others. We also have big automotive influencers like Donut Media, Schmee150. And the reason for them to partner with us is obviously is to tap into our digital audiences.

They can put their content on YouTube, which is great. And it gets discovered by all kinds of people. But it also makes sense to put that content in front of racing and automotive audiences and ours are the biggest. Where it gets even more exciting is for us to be able to co-create content with them. So for example, before the Le Mans 24 Hour Virtual esports event in June, we co-created content behind the scenes with Ferrari, as they prepared their teams. They had drivers at their headquarters in Maranello on some driving rigs. But then F1 star Charles Leclerc was at home in his flat in Monaco. We linked it all together, did some really nice pre-race behind-the-scenes content, including speaking to Leclerc, one of the hottest drivers in F1 as well as Le Mans drivers and gamers.  There are lots of things that we can do going forward as well.

Think of it as a YouTube for motorsport; also because in addition to being a destination in its own right, there is also an embeddable player, so we embed all the short-form videos into the editorial articles on our Racing and automotive news platforms.

And you have got some really big numbers on there: 5,000 plus hours of on-demand, video, 125 plus race series, how can people access this content?

Well, multiple ways; through the Motorsport.tv site, the Apps on iOS and Android. Then it is also on Roku, Chromecast, Apple TV. So it's a destination really in its own right. But as I said, quite special is the ability to have that embeddable player and to put the content in front of people in other ways to supplement that platform, whether it be in the editorial articles, or on social posts. A good example would be FIA Girls on Track.  We've got a partnership at the moment with the governing body, the FIA, and we work quite closely with them on really what you call the “purpose-driven” side of motorsport, which is a big push at the moment. So that's topics like sustainability, diversity, inclusion, etc. And on the diversity topic, they have a program called Girls on Track Rising Stars. So they've combed the world to find the best young female drivers, 14 to 16-year-old girls around the world. The winner is going to become the first-ever female Ferrari official driver and race in Formula Four, which is the first step of the single-seater ladder to F1. Exciting stuff. We have an FIA Girls on Track partner channel on the Motorsport.tv platform, the users can go there, see all the videos that have been generated from this competition. And then we also carry them across and embed them into articles on the editorial platform. So that gives you a little sort of case study of how it works. 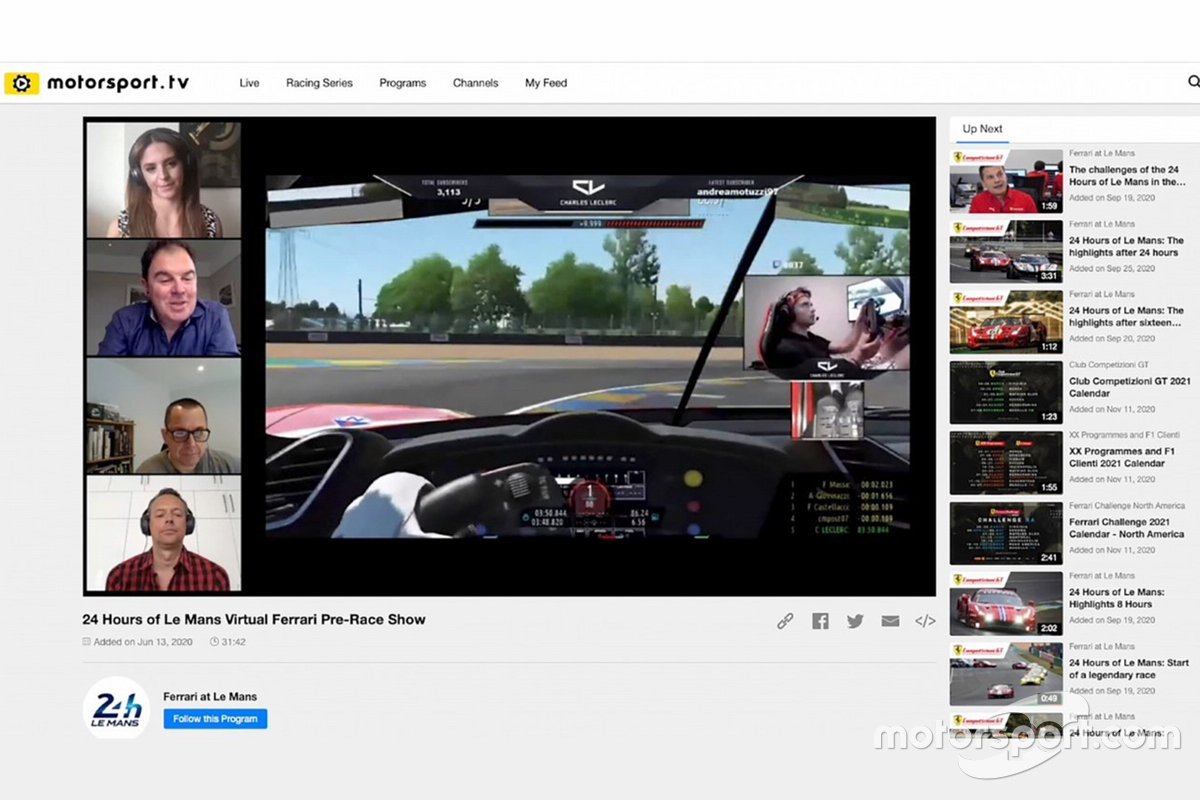 This leads me to the next thing that I wanted to ask you, which is who produces this content for the platform?

Well, a lot of the live stream content comes from the rights holders themselves, they generate it and send it across to us. And on-demand programming has been produced by various different people over the years. And we have a big archive of owned and licensed content. Going forward, we'd like to produce more of our own contemporary, original programming. That's certainly something that we've got in our objectives.

And how do you secure the rights for all of these motorsports events? I imagine it must be somewhat of a challenge.

Yes, it’s a discussion with the rights holders. And again, it's the access to our audiences that's the key here. It’s really important to understand that motorsport is a very fragmented environment; you have Formula One, Formula E, Le Mans, NASCAR, rallying Moto GP and they're all very fragmented, they all do their own thing. They're in their own kind of walled gardens. And beneath that, there are all kinds of different racing series that have their own followings. And they're all competing for attention with the other series, as well as with other sports and entertainments, and gaming increasingly for attention. So if you think about it, a live stream on our OTT platform, and driving the promotion of that on our racing websites and social channels makes a lot of sense. We're in a lot of attractive niches. I always like to say we “super-serve the underserved” within this highly fragmented environment.

And have you witnessed any sign of OTT fatigue as of yet? Or do you find that motorsport fans are happy to pay to access dedicated content in the sport that interests them?

I'm not detecting fatigue. I think people need content for lots of things. I mean, we're at a passion point for a lot of people. They like the escapism of Motorsports or exotic cars, or whatever they choose to come and watch. I think the most important thing with direct to consumer is that you've got the right offering and that your offer has distinctiveness, and that there are in-built reasons to care. And we have that because we’re in an area people have a passion for. Motorsport audiences very passionate, they're relatively affluent, typically tech-savvy, early adopters. So we're in an attractive market. We also have one of the major global growth trends boosting our mission; digital transformation. Breaking that down, it’s the move away from linear TV, growing popularity for connected TVs, direct to consumer models, the proliferation of high-speed internet and 5g, consumers’ growing appetite for content-rich applications, and also high levels of personalization. I think it is going to become increasingly important to provide a curated feed for people. And on top of all that the growth of gaming and eSports. We have a strong business in that space and we can obviously, cross-promote as well. So, I feel very positive about the way forward for the OTT space and our offering in particular. 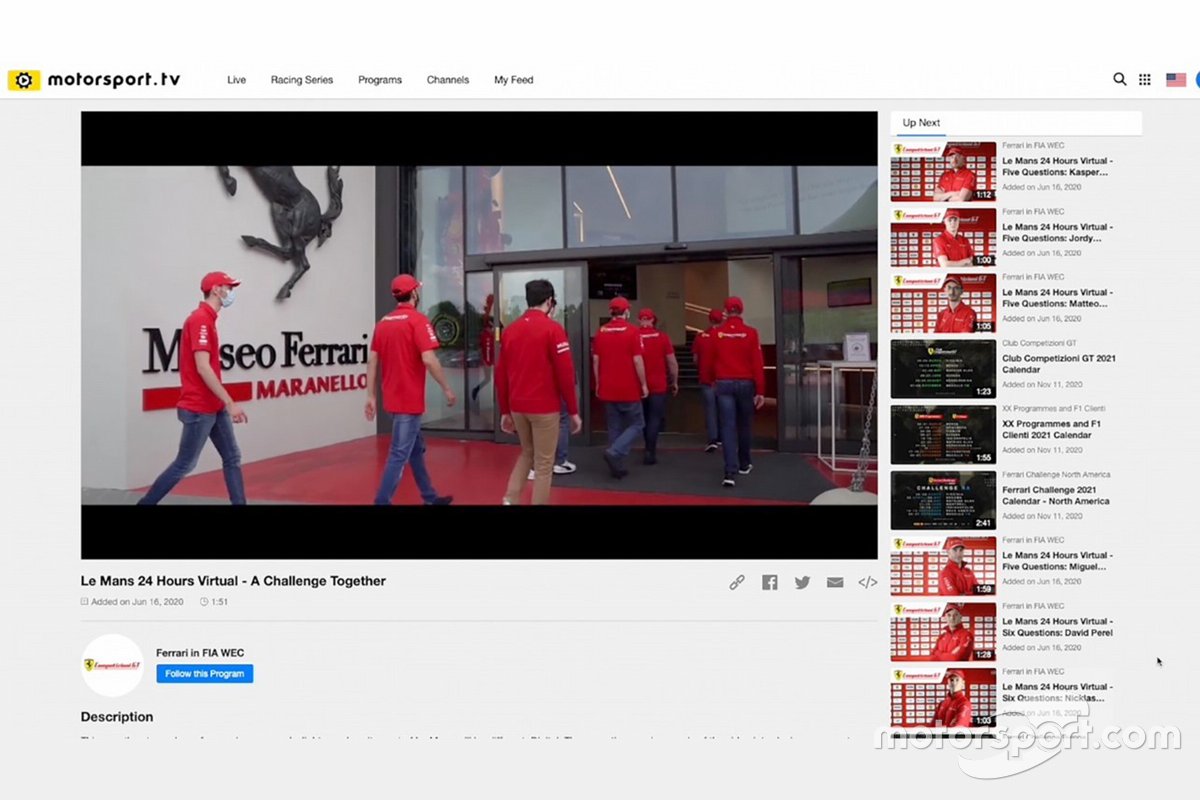 Will esports play an important factor in your growth?

Definitely. It's a huge part of what we do. I'm really excited about eSports. I mean, I've been in the sport for 30 years. I have worked with Senna, Prost, Mansell, Schumacher, Hamilton all these great drivers, driving real cars. What they do is difficult and dangerous, and we love them for it. On television, it is so exciting. But the problem is so few people can get there; it is almost impossible to become a Formula One driver. Lewis Hamilton, how on earth he did that from his humble beginnings is a miracle. And it'll get more difficult as the years go forward. But esports and gaming open up this huge funnel. One of the reasons we got into esports and gaming is because we looked at our website audience data and found a large contingent who were console owners. That gave us great confidence to launch that business. I love it. It’s a great democratizer; it really opens the door and creates a new funnel for both participants and spectators. And having your own OTT platform to distribute that content is a great asset.