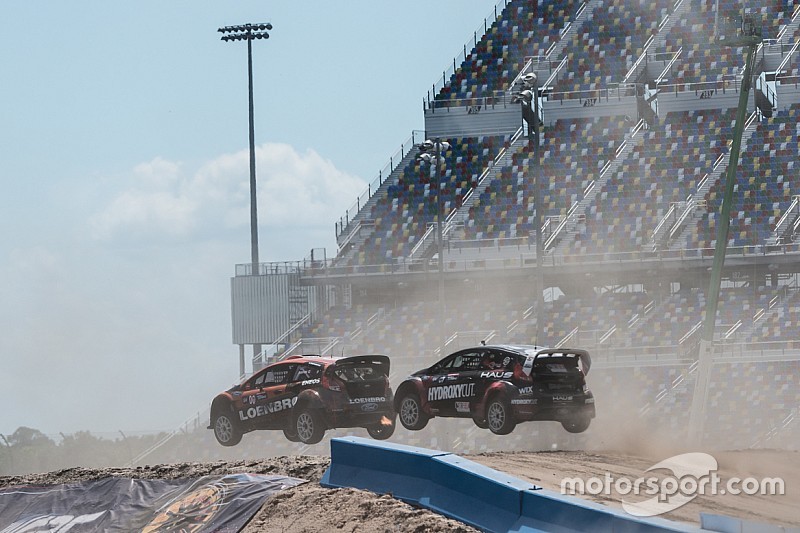 Rounds five and six, the halfway point of the 2015 Red Bull Global Rallycross season, will see the sport tackle Belle Isle for its inaugural visit to Detroit.

Points leader Ken Block enters the event with a 31-point advantage over Sebastian Eriksson, while Fords hold the top five championship spots coming into the weekend.

Ken Block took advantage of a red flag situation in the main event to grab his second win of the year at MCAS New River. Patrik Sandell, who led handily before the red flag, took his first podium of the season for Bryan Herta Rallysport after a last-lap dive into the Kobalt Tools Joker Lap, while SH Racing Rallycross driver Nelson Piquet Jr. completed the podium.

All 12 Supercar drivers who competed at MCAS New River will be returning to the track in Detroit. No additional drivers will be running this weekend.

The Belle Isle course features 10 turns and .757 miles of track. Featuring one of the most pronounced Kobalt Tools Joker Laps of the season, as cars split around the James Scott Memorial Fountain, the track should offer numerous passing opportunities and fast, wide-open stretches. Click here for more information on the track.

Owing to mechanical issues, neither Tanner Foust nor Scott Speed was able to make the main event at MCAS New River, marking the first time in Volkswagen Andretti Rallycross history that both cars missed the main event. Speed finished second in the Fort Lauderdale season opener and won gold at X Games Austin, but since then has not finished better than ninth. Foust’s last-place finish at New River was his first finish outside of the top five all season.

Tanner Foust, #34 Volkswagen Andretti Rallycross Beetle: “A doubleheader through a rat maze of concrete involves staying off the concrete—I think that’s the obvious thing. When you cruise around the track, you realize that it’s going to have really difficult visibility. Not only do you have some big cars right in front of you, but you also have walls that are higher than your eye level. But it’s kind of a bumpy surface, there’s rain expected, and so just the slightest little slip off of line would be a catastrophe I think, and it could be a big crash. The jump not having any sides on it, it’s going to be important not to go from 15 feet straight to grass. So for sure, there’s a lot to be careful of, but it’s a fast track and a lot of the corners you really can attack.”

Sverre Isachsen, #11 Subaru Rally Team USA WRX STI: “Definitely this a venue for horsepower. For the moment, we’re trying to make more horsepower every race. We will fight with what we have, we’ll push really hard again for this race. You need to try to use your head, of course, but you have other drivers also, so you’re not alone in deciding what you can do in the corner because there are other guys. If they push me, I’ll definitely push back.”

Austin Dyne, #14 Bryan Herta Rallysport Ford Fiesta ST: “These kinds of tracks have a lot of character. Certain parts of the track have a lot of concrete, and there are a lot of parts with a lot of really bumpy asphalt which makes it cool. When it’s all flat and perfect it looks kind of boring. This track definitely has a lot of character and there are a lot of fast, kind of sketchy fast corners which makes it really exciting. It should be cool on TV for the fans, and with some really tight stuff it’ll be interesting to see how it plays out.”