Defending race winner Nelson Piquet Jr. returns to a Supercar for the first time this season to go for back-to-back victories in the nation’s capital. 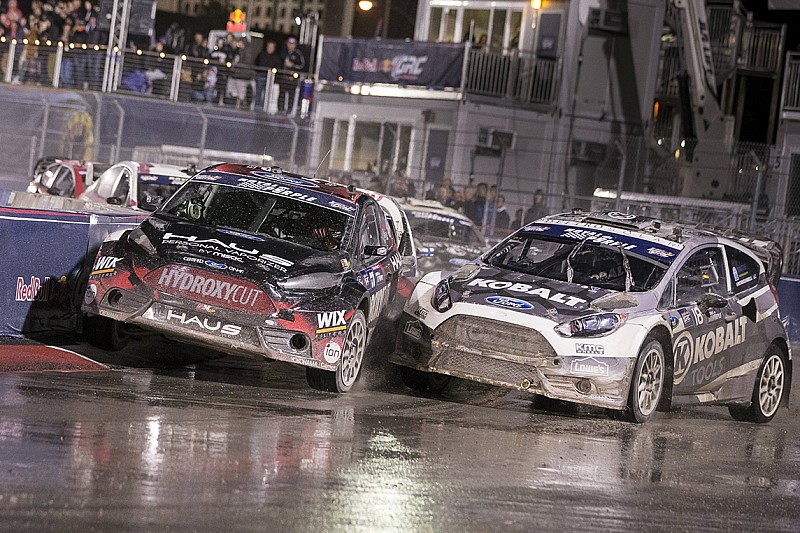 The second half of the 2016 Red Bull Global Rallycross season kicks off with a return to Washington DC and a new course layout at RFK Stadium. Defending race winner Nelson Piquet Jr. returns to a Supercar for the first time this season to go for back-to-back victories in the nation’s capital.

This year’s Washington DC course returns to Lot 8 of RFK Stadium, but reverses direction as part of an entirely new .899-mile layout. The 10-turn course includes a new technical section beneath the DC Metro, and a jump leading directly to the finish line.

With the right combination of finishes this weekend, any of the top five drivers in Supercar points can leave Red Bull GRC Washington DC with the championship lead. Current leader Tanner Foust (295 points), Steve Arpin (286), and Scott Speed (279) have the best chance of heading to Atlantic City on top; fourth-place Brian Deegan (248) and fifth-place Patrik Sandell (243) are also within striking distance this weekend and can take the top spot by capitalizing on others’ potential struggles.

Located in nearby Herndon, Virginia, Red Bull GRC Washington DC represents a home race for Volkswagen USA. Drivers Tanner Foust and Scott Speed, combined winners of three Supercar titles, have yet to crack the podium, but both enter the weekend as favorites; Foust has already tied the single-season record for heat and semifinal wins with 16, while Speed is the series’ most recent race winner at MCAS New River.

Nelson Piquet Jr. rejoins SH Rallycross/DRR for this weekend’s event in hopes of defending his Washington DC victory last year. In 22 starts for the team from 2014-15, Piquet earned eight podium finishes and finished fourth in the final standings in both seasons.

Nelson Piquet Jr., #07 SH Rallycross/DRR Ford Fiesta ST: ““I’ve missed competing in Red Bull GRC with SH Rallycross/DRR. I had such a great couple of seasons with the team and I love rallycross. Sulli and I are friends and have kept in touch. I’m so excited to have the opportunity to race again with the team that helped me get my first GRC victory.””

Patrik Sandell, #18 Bryan Herta Rallysport Ford Fiesta ST: “I am very excited for Washington DC again. My first time here it was fantastic, and we won. The second time, we placed second. I am happy to have Nelson back—I told him to watch my back now, as I was watching his back last year. Hopefully the weekend will treat me well.”

Austin Dyne, #14 AD Racing Ford Fiesta ST: “This track should be better than last year, even though last year was a quite big improvement from the first year where the lot was half the size. It’s hard to compare, but it should be good. I saw the track and it looks good. I’m sure it will drag dirt on the front stretch, which will make it quite slippery, and that kind of mix between tarmac and dust that creates a lot of passing will be there.”