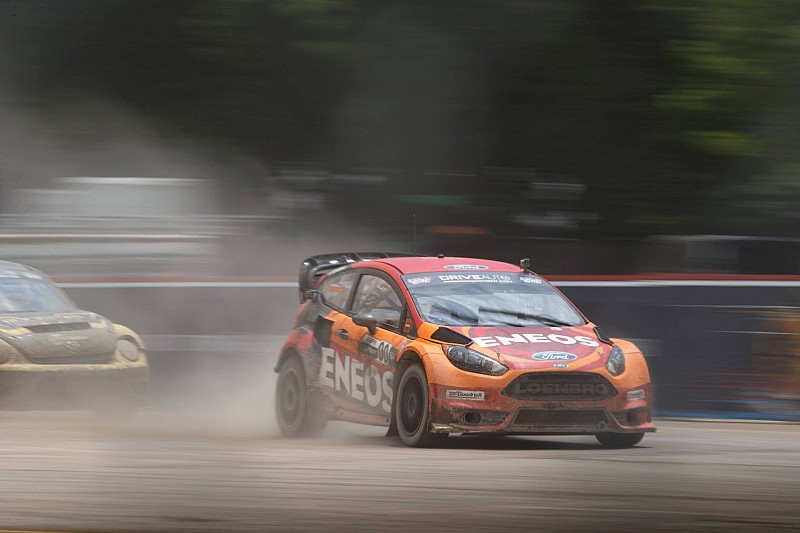 The event at Marine Corps Air Station New River will serve as the halfway point for drivers as well as the fourth event on the schedule in only seven weeks.

After an incredibly successful debut event in 2015, Red Bull Global Rallycross expands its visit to Marine Corps Air Station New River to a doubleheader in 2016. Hosting Rounds 6 and 7 of the season, the event will serve as the halfway point for drivers as well as the fourth event on the schedule in only seven weeks.

At Daytona International Speedway, a chaotic, rain-affected Saturday final ended with DNFs for Tanner Foust, Patrik Sandell, and Scott Speed, while Steve Arpin and Chip Ganassi Racing took advantage of the opportunity to take their first Red Bull GRC victory ahead of teammate Brian Deegan. Sunday was back to normal for Foust and Speed, who finished 1-2 for the second time this year. Sebastian Eriksson continued his perfect podium streak at Daytona by finishing third on both days.

Subaru Rally Team USA returns to the Red Bull GRC grid for the first time in 2016, with series mainstays Sverre Isachsen and Bucky Lasek beginning their fifth season as Supercar teammates. Lasek gave the team a victory in the last chance qualifier at this event last year.

Three major changes define this year’s Red Bull GRC MCAS New River layout: a switch to a shorter, counterclockwise layout; an extended and more complex dirt section; and a Joker Lap that leaves the dirt but runs longer than the main course. Click here for more information on the track.

On a weekend where Chip Ganassi Racing made history by giving the Ford GT a victory in the 24 Hours of Le Mans, Steve Arpin made sure that the team had something to celebrate on both sides of the Atlantic Ocean with a win in Daytona. The win was Arpin’s first in 35 career Red Bull GRC starts, as well as the first for the team; Brian Deegan’s runner-up result also gave the team its first 1-2 finish.

A fan favorite in the Red Bull GRC paddock, Subaru Rally Team USA skipped the first three events of the 2016 season to focus on extended testing of its WRX STI. This weekend, drivers Bucky Lasek and Sverre Isachsen finally return to the grid with all-new rides; with five years on the squad apiece, they are the series’ longest-tenured drivers with a single race team.

Last year’s MCAS New River final saw Volkswagen Andretti Rallycross sitting on the sidelines, as both Tanner Foust and Scott Speed saw their race end early due to mechanical failures. This year, Foust and Speed enter the North Carolina round at first and third in points; while reliability issues have plagued Speed as of late, both drivers are as quick as anyone on this weekend’s entry list.

Tanner Foust, #34 Volkswagen Andretti Rallycross Beetle: “Daytona was a difficult weekend from everyone, but the VARX team rally showed what it was made of, getting us back to the top step of the podium on Sunday. With that sort of effort and determination, we’re capable of anything, so I’m looking forward to a less stressful event.”

Scott Speed, #41 Volkswagen Andretti Rallycross Beetle: “Once again we proved how quick we are in Daytona. Without the sort of gremlins we’ve been having, our results would look very different, so I’m ready to get things sorted and turn the corner for a better second half of the season. I’m honored to be carrying the SOWF colors this weekend as we compete at this awesome venue, honoring our troops over the holiday weekend. VARX is looking forward to raising awareness for this important organization, and we’ll be doing our best to bring home a great result for them.”

Bucky Lasek, #81 Subaru Rally Team USA WRX STI: “New River has been awesome with the support of the military and the fans. It’s one of the best events because of all the heart and passion with motorsports that the military personnel. Aside from that, the track is fast and that’s always nice. It did give us our only class win last year, so that was awesome. I think all in all it’s just a great event and it’s for the right reasons—we are here to support the troops this weekend, and the patriotic weekend that it is, it seems fitting to be here.”