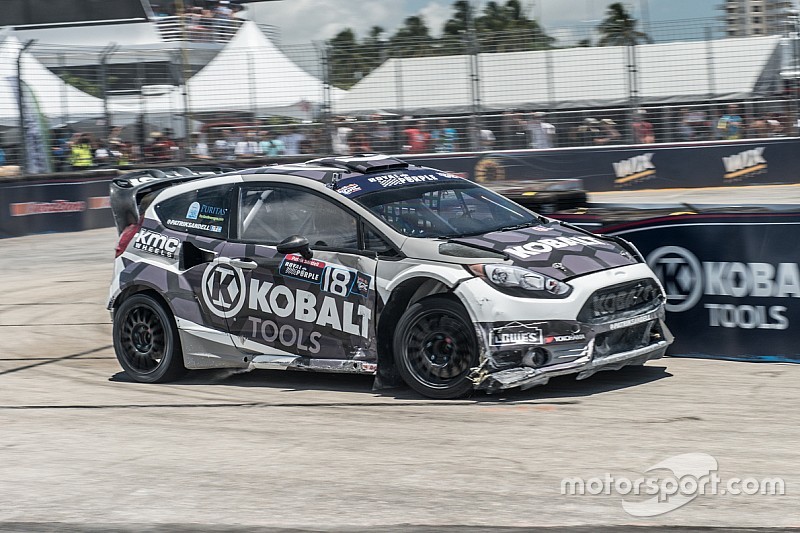 Sunday’s win was a comeback story for the Sandell, who had suffered a driveshaft failure a day earlier, handing his first shot at victory this weekend to rival Ken Block. The win is Bryan Herta Rallysport’s first Supercar win since the team joined Red Bull GRC at the start of 2015.

“We have a fantastic car,” said Sandell. “My team has put together the perfect package for me, and we’ve been able to be fast for a while, but we hadn’t been able to get to the finish. Yesterday we had a problem with the car and retired in the final, but today Bryan Herta and his guys just put everything together for me. I’m so happy for them—this victory goes to them.”

The last time Sandell topped the podium was a little over a year ago at the June race in Washington D.C., while he was driving for the Olsbergs MSE organization.

The Sunday race had to restart after a red flag halted competition when Block, Sandell, and Volkswagen Andretti Rallycross driver Tanner Foust made contact between turns one and two, leaving Foust’s disabled vehicle sitting in the racing line and bringing out the red flag..

Block was issued a penalty rough driving and sent to the back of the grid for the restart and Foust was unable to restart.

On the second run at the final, the race saw a duel between Sandell and Speed off the start and when Sandell took the joker on the first lap , he claimed the lead and never relinquished it.

In GRC Lites, Dreyer & Reinbold Racing’s Miles Maroney had a winning weekend. The rookie GRC Lites driver took his first career win on Sunday, following up on a runner-up result a day earlier. He beat AF Racing’s Alejandro Fernandez in a photo finish, taking the win by .161 seconds. Austin Cindric of Olsbergs MSE took third, to move into the championship lead.