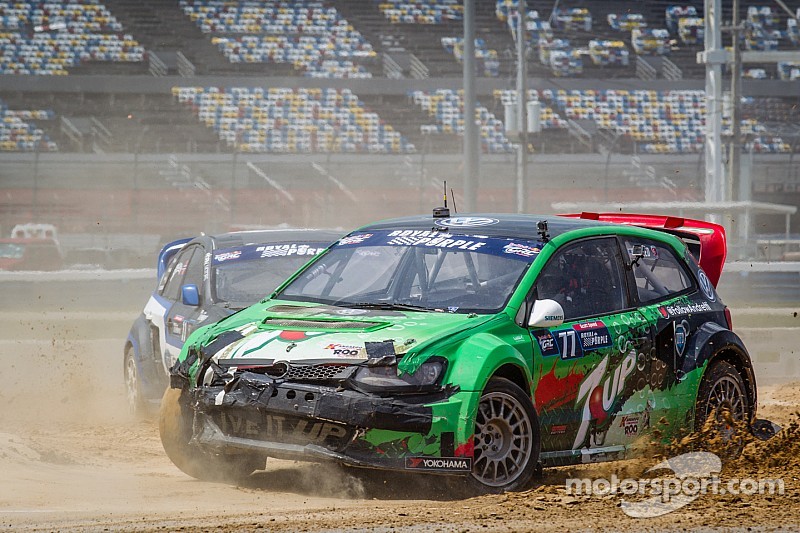 In the last race, one of the most popular races -- and results -- in Red Bull GRC history, Subaru Rally Team USA driver Sverre Isachsen took the first series victory for both team and driver at DirtFish Rally School in September. Isachsen, who earned the fifth podium of his Red Bull GRC career, held off Joni Wiman and Brian Deegan for the victory.

This week, Pat Moro returns to the Red Bull GRC field for the first time since Daytona International Speedway in August. Moro, driving the #59 PMR Motorsports Chevrolet Sonic, will be making his fifth start in the Sonic, dating back to last September at The Dirt Track at Charlotte.

The track is a .627-mile, counterclockwise course at The LINQ which features a 62% pavement to 38% dirt split. With a sweeping first corner, multiple hairpins, and a long backstretch, the wide course is certain to feature numerous passing opportunities. The joker lane, which bypasses the jump and leads to a hairpin before the finish line, will offer drivers a multiple second advantage per lap.

For the first time, the Red Bull Global Rallycross Las Vegas season finale will take place at The LINQ Hotel and Casino, a Caesars Entertainment Corporation property. Caesars Palace has an extensive history of motorsports productions, including multiple Formula 1 races in the 1980s and Evel Knievel’s famous motorcycle jump in 1967. This will be the third consecutive year in which Red Bull GRC wraps up its season in Las Vegas; in 2012, Tanner Foust took the season-ending victory and championship, while Ken Block took his first series victory in Las Vegas last year.

Olsbergs MSE rookie and defending GRC Lites champion Joni Wiman is in the catbird’s seat heading into the season finale, holding a 12-point lead over Hoonigan Racing Division’s Ken Block. But with 56 points on offer at every Red Bull GRC event, that lead is far from safe; in fact, SH Racing Rallycross’ Nelson Piquet Jr. (28 points back) and Volkswagen Andretti Rallycross’ Scott Speed (29 behind) are also still eligible for the championship. Wiman can clinch the championship with a second place finish regardless of heat results, but under the right circumstances, can clinch the title with a finish as low as fourth.

When Austin Dyne missed the final at Red Bull Global Rallycross Seattle, it meant that Scott Speed became the last remaining Supercar driver to have competed in every main event in the 2014 season. His impressive run comes despite having appeared in four of the last five last chance qualifier races. Speed’s main event streak now dates back 13 races to last August at X Games Los Angeles, tying it for the third-longest streak of its kind in series history. He will attempt to extend the streak while racing a Beetle for the first time.

Joni Wiman, Driver, #31 Olsbergs MSE Ford Fiesta ST: “I think we have a good setting, for sure—it’s going to be pretty similar to what we had in LA. We just need to get the tires to last for 10 laps. The track looks really good—we have long straights, and so it’s really important to have a good technique on the brakes. I think I’m pretty good at that, so maybe we can see some passing on the brakes.”

Ken Block, Driver, #43 Hoonigan Racing Division Ford Fiesta ST: “There’s a good, long, first left-hand corner that I think will make for some good racing. The difficult part is where the sand is going to get dragged onto the hairpins after them, because it can make for some very tricky racing if too much gets dragged on. We’ll just have to adjust to it. Even from the little bit of media rides, the braking into some of the hairpins totally changed because of sand being moved around. I think it’ll be good—it’ll make for some good racing, and it’ll be fun.”

Nelson Piquet Jr., Driver, #07 SH Racing Rallycross Ford Fiesta ST: “I think it’s going to be fun. The first two corners are pretty quick—if someone goes off, it’s going to be a high-speed hit, so I hope for everybody to be safe. But I think they did a good job. A lot of tracks, some drivers complain it’s a bit tight or very narrow, but in this situation we have a really wide track that’s going to be great for racing. It’s going to be great for lines, with everyone choosing their lines, and there’s not going to be a lot of clutter. I wouldn’t change anything. It’s still very difficult because there are high speed corners and we have to be very careful, and I’m looking forward to it.”

Bucky Lasek, Driver, #81 Subaru Rally Team USA WRX STI: “I think this track is going to be really good. Turn one and two, leading into the straight, there’s a good opportunity there to get inside of someone, but then again it could open up the door to get it back if you don’t get a good run on the backstretch there. There’s a couple of good passing zones, I feel. We won’t really know where we are on the setup, but we’ve come here on a totally different setup than we’ve had. We’ve taken some turns into account from previous races we’ve had. We’ve had some turns that we’ve struggled on, and we’ve fixed some problems. I think we’ve taken the basis of what we’ve learned on tarmac setup and applied it already to this car, so we should be strong right out of the gate.”

Pat Moro, #59 PMR Motorsports Chevrolet Sonic: “It’s going to be fast. It’s really fast into sharp hairpins, and when you have that, I think you’re going to see a lot of guys getting into the back of each other, pushing each other. But when it goes at night, the cool thing to look at on these cars, for the fans that don’t know a lot about rally—when you see the brakes, they’ll be glowing red and sparks will be coming off of them. Everything is so much cooler at night. Looking at the track, I like the backdrop a lot better here, with the giant Ferris wheel and all the buildings around. This is a pretty epic scene here, and I think it’ll be pretty exciting.”