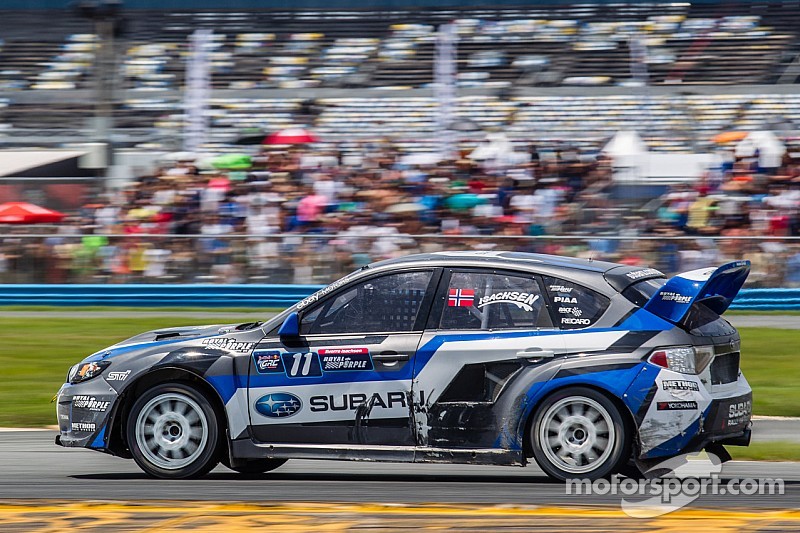 Due to a pushed back schedule on Friday, this weekend’s event followed the same format as the second half of the Los Angeles doubleheader, with one round of heats and the semifinals paying points. Ken Block, Joni Wiman, and Rhys Millen won the three heats, while Block and Wiman also took the semifinals to line up on the front row. Tanner Foust won the last chance qualifier in only the third race for his new Volkswagen Beetle.

Starting on the inside of the front row, Block had the clear-cut advantage, but after missing his braking point into the joker and then making contact with Tanner Foust, his hopes of extending the championship lead vanished. As Block limped around the course, Sverre Isachsen converted his second-row starting spot into the lead, to the delight of the Pacific Northwest fanbase.

Behind him, Brian Deegan ran in second, though WIman drove aggressively to make up time and eventually jokered to take away the spot. Deegan hung on for third in a tooth-and-nail fight with Nelson Piquet Jr., who settled for fourth place, while Rhys Millen overcame a last chance qualifier appearance to climb through the field and complete the top five.

Joni Wiman, Driver, #31 Olsbergs MSE Ford Fiesta ST: “It looked a bit bad in the first half of the season, but we worked hard and never gave up in the second half of the season, and that’s been really good. It’s amazing to lead the championship. I’m happy now, and I want to go. It feels amazing to be here. Of course I want to win a race, but another time. It was an amazing track—when we go out there the adrenaline started to rush, and I think it was the best track of the season. I really enjoyed it.”

Brian Deegan, Driver, #38 Rockstar Energy Drink Ford Fiesta ST: “If you had asked me yesterday how I’d do, I definitely didn’t think I was going to be on the podium after qualifying dead last. I’d say the worst thing about the other day was not getting laps, because this is the most fun track right here. This is the track where the real drivers are laying it down, getting through, being fast, and picking lines to find traction. I think this is rallycross, right here. In the end it made for a great race the whole time—just watching the cars go around the track was so entertaining, to see the guys and the driving talent out there. And car setup here, I think it was the most important track for car setup. It was a challenge for everyone.”

• Sverre Isachsen scored the first victory of his Red Bull Global Rallycross career, and the first for Subaru Rally Team USA in Red Bull GRC, in Saturday’s event. It was Isachsen’s first overall race victory in rallycross since October 2011, when he finished his third consecutive European championship-winning season with a victory in the Czech Republic.

• Joni Wiman earned his third podium finish in eight days by finishing second in Seattle. It was his fourth podium finish of the year. He became the Supercar points leader for the first time in his career with the victory.

• Brian Deegan earned the 12th podium of his Red Bull GRC career, second-most of all time, and his second podium of the season by finishing third on Saturday.

• Austin Dyne failed to appear in a main event for the first time this season by finishing sixth in the last chance qualifier. Scott Speed is now the only driver to have made it to every main event this season.