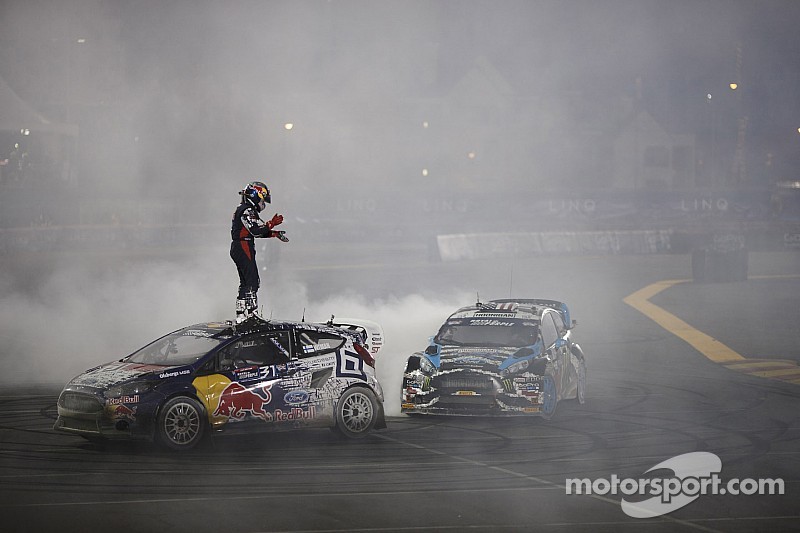 Ken Block won the battle, but Joni Wiman won the war at Red Bull Global Rallycross Las Vegas at The LINQ. Block did everything he could to steal the title from the Finn, but Wiman’s runner-up finish was good enough to earn the title by five points—the equivalent of a single finishing position over the entire season.

The first two rounds of heats saw Scott Speed and Tanner Foust win a pair of sessions apiece in their Volkswagen Andretti Rallycross Beetles, while Ken Block won both of his heats as well. In the semifinals, Bucky Lasek got by the field to win the first session, while Block won the second; Sverre Isachsen won the last chance qualifier over Brian Deegan, Tanner Foust, and Emma Gilmour, the first female finalist in Red Bull GRC history.

In the main, an aggressive move by Speed into the first corner saw him get into Lasek, spinning both cars and necessitating a red flag; Speed was moved to the back of the field on the restart. The second go-around was clean, with Block, Lasek, and Speed working into the first three spots and Wiman fourth, putting Block in the championship drivers’ seat.

However, when Lasek and Speed began jostling for position, Wiman executed his joker lap to perfection and climbed to second, well ahead of the battle for the final podium spot. As such, Block’s unblemished main event and second victory of the season weren't enough to wrest the title.

Ken Block, Driver, #43 Hoonigan Racing Division Ford Fiesta ST: “Every time, coming here and needing a good finish to have a good overall season result has just put the pressure on me. The thing was, there was no other result for me here—I had to win everything I could. The team and I worked hard to make that happen, but unfortunately I won the battle and lost the war by one position. It is what it is, but it really disappointed me because it goes back to Seattle. I should have won that event, and I threw that away with a tiny mistake. I’m happy to have won, but disappointed at the same time—but that’s racing.”

Joni Wiman, Driver, #31 Olsbergs MSE Ford Fiesta ST: “I don’t believe it—it’s just amazing. I haven’t realized it yet. It’s like a dream come true. The first start before the red flag was my best one—actually, everything looked clear after the second corner. I was maybe third out of the first corner in the restart, and we just were pushing for it. I fell down to fourth when Scott (Speed) took the joker, but then they started to have a small fight, so I decided to take the joker. I think it was pretty tight, but I’m happy it was enough.”

Bucky Lasek, Driver, #81 Subaru Rally Team USA WRX STI: “This was a good weekend for us. We came here with the right setup. Knowing how fast I was in DC, knowing how the car turned in LA, we put the whole package together for this last race, and we came in with a strong car right off the bat. I was running in the top three as far as pace. I got caught on some bad calls, as far as getting outside lane choice, getting stuck on the outside and banged around a bit, but today I was able to win a semi—that’s a big accomplishment for me and the team. And we showed our pace. We got crashed into, we had a restart for the green, and I was able to tuck in behind Ken and keep up and pull third, which is really solid for us right now.”

Emma Gilmour, Driver, #27 Hyundai/Rhys Millen Racing Veloster Turbo: “I’m so excited! We were all a bit down, I suppose, because we got taken out a bit in the semifinal, and the boys had a lot of work to do to get it fixed. We broke the rear upright and so we were back off the back row in the LCQ. We felt we sort of needed a bit of luck to go our way for a change, which it did! It really went our way. When we got P4, I was really excited, and so was the team. It’s just been a huge buzz, it’s a lot of fun. Like I always say, it’s like a video game. It’s unreal. It’s so desperate out there, and it’s so cool.”

The momentum just kept rolling for Mitchell DeJong in an incredible 2014 GRC Lites season finale in Las Vegas at The LINQ Hotel and Casino. DeJong, who entered the weekend with the championship already in hand, won a record-setting seventh event over international Supercar star Andreas Bakkerud and Austin Cindric.

Mitchell DeJong and Andreas Bakkerud took two heat victories apiece in the build-up to the final. The most dramatic moment came in the second heat of the first round, when Kevin Eriksson’s aggressive move to the inside caught Tyler Benson and spun both vehicles, earning Eriksson a trip to the penalty box on the restart.

In the main, a poor start from DeJong dropped him from the top spot to fourth place at the end of the first lap, with Bakkerud, Austin Cindric, and Benson running in the three podium places ahead of him. But the 17-year-old showed his true talent in a remarkable come from behind drive, using a combination of fast laps and his joker lap to pick off the three drivers ahead of him one by one.

UNOFFICIAL RESULTS: The results from Wednesday’s Red Bull Global Rallycross Las Vegas at The LINQ, the final round of the 2014 GRC Lites season: