Speed and Bigham win first round of GRC Indianapolis heats 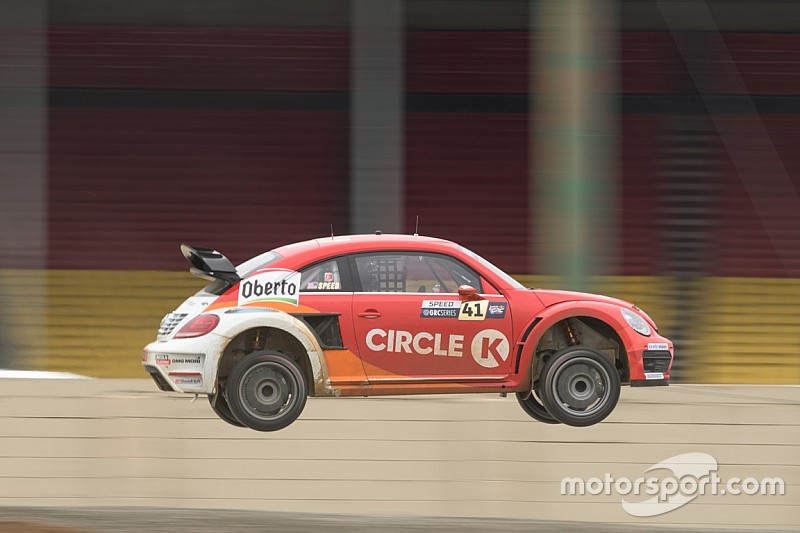 Under sunny skies from the Racing Capital of the World,GRC cars made their Indianapolis debut at Lucas Oil Raceway for Day 1 of Red Bull Global Rallycross Round 7 racing

Supercar Heat 1A began with Bigham nearly spinning but taking the lead as drivers hit the frontstretch. Bigham and Steve Arpin spent most of the race trading the top spot, but Arpin earned a stop and hold penalty for a Joker Lap commitment line violation. That penalty was enough for Bigham to take his second heat victory of the season.

Heat 1B saw Speed and teammate Tanner Foust in a drag race on the first lap, with both drivers saving the longer Joker Lap for the final lap. Unfortunately, that proved to be Foust’s undoing; he misjudged the entry and earned a three-second penalty not making the commitment box and cutting the track to take the Joker. Speed was able to take a comfortable win over Honda Red Bull Olsbergs MSE drivers Sebastian Eriksson and Mitchell deJong.

Red Bull GRC Indianapolis resumes on Sunday with the remaining heats, semifinals, and finals for the Supercar and GRC Lites classes.

Scott Speed (No. 41 Oberto Circle K Beetle GRC}:  “It’s been a perfect weekend so far. Tomorrow we just have to keep it clean and get off the line which hasn’t gone perfectly to plan so far. We’re still struggling to consistently get off the line. Luckily we haven’t gotten bit by it yet, but we’re still working hard to make sure our launches are consistent because if we get off the line clean we are dialed in on the rest of the track. It’s always great when we can get the Oberto Circle K car across the finish line first and hopefully we will get a few more wins for the home crowd in Indianapolis tomorrow.”

Scott Speed wins Round 7 in Indianapolis