8Star Motorsports will have two cars competing at Watkins Glen

The No. 3 8Star team is currently seventh in the 2013 Grand-Am Rolex Series team standings with 145 points. 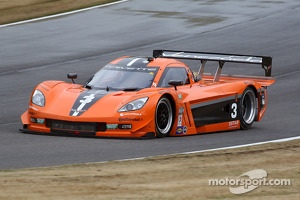 8Star Motorsports will have two Rolex GRAND-AM Series Daytona Prototype cars competing at Watkins Glen. Stephane Sarrazin, Michael Valiante, and Enzo Potolicchio will drive the No. 3 Chevy Corvette DP with Luis Diaz and Emilio DiGuida and in the No. 4 Corvette DP.

Additional Driver Lineup for The Glen… Luis Diaz and Emilio DiGuida will drive the No. 4 8Star Motorsports Chevy Corvette DP at The Glen. Diaz won the 2009 American Le Mans Series LMP2 Drivers' Championship alongside Mexico countryman Adrian Fernandez and has eight wins, 18 podiums and seven poles in GRAND-AM DP competition. DiGuida had three Grand-Am Series GT starts in 2012 and earned five driver championships in his native Venezuela from 1994 through 2006.

8Star at Le Mans… 8Star Motorsports team owner and co-driver Enzo Potolicchio finished 10th in the GTE-Am class in last weekend’s 24 Hours of Le Mans with co-drivers Rui Aguas and Jason Bright. The No. 81 8Star Motorsports Ferrari 458 Italia suffered a tire puncture early on in the race and was never able to make up the lost laps. 8Star GRAND-AM Series co-driver Stephane Sarrazin finished second overall driving the No. 8 LMP1… it was the third time the Frenchman has finished runner-up in the race (2007, 2009, 2013).

Enzo Potolicchio: “I feel very proud of the 8Star team for all the work they’ve done the past few weeks. They got the backup car ready after the Detroit crash and we ended up getting our first podium. And then they came back and put the original car back together so we will have two cars at Watkins Glen this weekend.

They’ve worked 12-plus hour days every day without a break and it’s not only been prepping the cars: it’s been getting all the equipment for two teams prepped for the weekend. We’ve even had the transporters painted.

It’s been crazy around here and I’ve been away (at Le Mans) but the guys have sent me pictures every day to see their progress so I’m really proud of what they’ve accomplished. It shows their commitment to 8Star and making the team grow.”

“Having a two-car team will be very helpful for setups and development. We will be getting feedback from two cars now instead of one. Having Luis (Diaz) in the car gives us another strong driver to give feedback to Yves (Touron, race engineer).It’s a growing process, and it’s been painful at times, but it will pay off at the track.”

“I’m looking forward to racing with (Stephane) Sarrazin and (Michael) Valiante at Watkins Glen. We should have another strong result there if everything goes well. It’s a long race and a lot can and will happen over six hours but we feel good about having another strong race.”

“The experience at Le Mans was the toughest of my career and it was the same way in the whole paddock. The accident with (Allan) Simonsen was tragic and put a lot of additional stress and strain for so all of us. Then the off and on rain made it so that there was not one lap that was identical to any other.

There were corners dry one lap that were wet the next lap. It was a challenging race to keep it on the black stuff. We had a really fast car and should have had a better finish. We had a puncture and that’s just racing. We have to focus on the world championship now. We’re fourth in the points and not far out of first. Brazil is a good track for the Ferrari and I think Austin will be a good one for us, too.”

Michael Valiante: “I am really looking forward to Watkins Glen and carrying our Mid-Ohio momentum into this weekend. It will also be great to be teamed up with Stephane Sarrazin after his recent success in Le Mans. Last year this was another great track for me as I won the Continental race in ST”.

Emilio DiGuida: “The opportunity to drive for 8Star Motorsports in my first Daytona Prototype race is very exciting for me. Sitting inside the Corvette DP is a bit strange for me because I’ve spent all my time in GT cars but I feel comfortable in the car. My teammate, Luis (Diaz), is a good guy and very fast so I look forward to learning a lot this weekend at Watkins Glen.”

Bourdais and Kaffer join Starworks for Six Hours of The Glen

Rain washes out DP qualifying at The Glen: Taylor and Angelelli awarded pole