One year later, 2012 Rolex 24 At Daytona winners AJ Allmendinger and Andy Lally have lost none of their speed at Daytona International Raceway as both drivers topped their respective GRAND-AM Rolex Sports Car Series classes in the opening day of Roar Before the Rolex 24 testing.

On a day that started with rain and progressively dried out, both drivers set their fastest time in the afternoon session, with Allmendinger pacing the lead Daytona Prototype class and Lally topping the production-based GT. David Donohue led the way in the debut of the GX category.

Returning to the No. 60 Michael Shank Racing Ford/Riley, Allmendinger turned a lap of 1:42.918 (124.526 mph) at the tail end of his 12-lap stint early in the afternoon. That was enough to hold off both of the Target/TELMEX Chip Ganassi Racing with Felix Sabates BMW/Rileys by the end of the two hour and thirty minute afternoon session.

“The track was a little damp,” Allmendinger said. “The race line, for the most part, was dry, but if you put a wheel wrong, especially early in the session, and got onto the wet, you had a chance to wreck the race car. There’s no need for that in the first 30 or 40 minutes into a test. It’s just about patience.” 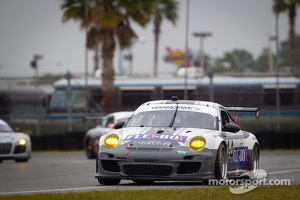 In the Continental Tire Sports Car Challenge, Andrew Aquilante made the most of his No. 35 Subaru Road Racing Team Subaru WRX-STI’s all-wheel drive on the damp track, topping both practice sessions in the GS class. His fastest lap, a 2:06.773 (101.094 mph), came in the afternoon session.