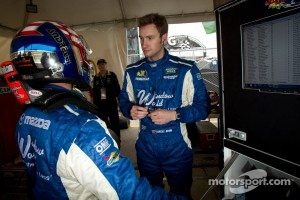 Thanks to an opportunity from Mazda North America, Window World, PM International Suppliers and Yellow Dragon Motorsports, Krohn's first endurance sports car race ever was a landmark event, as 2012 marked the race's 50th anniversary. Krohn learned a great deal and now he has another goal: to return to complete some unfinished business with the 3.56-mile, 12-turn speedway road course.

Krohn and his teammates - John Andretti, Taylor Hacquard and Jarett Andretti - completed 270 laps in the Window World/PMFirst.com/Mazdaspeed Mazda RX-8 No. 36 fielded by Yellow Dragon Motorsports. They finished in the same position that they started - 37th in the GT class - after they retired due to engine problems 49 minutes shy of the halfway point. Although they were disappointed that they didn't finish, they had no crashes or penalties and they successfully fought back from a host of small problems in an effort that had only come together after the series' test at Daytona Jan. 6-8.

Krohn gained an array of new experiences, including driving at Daytona, driving at night, driving on the same track at the same time with a faster class in addition to one's own, pit stops and driver changes. He took it all in stride and came away from the experience wanting much more.

"It's frustrating to have something like that take us out when we were having such a good run, and especially since these Mazda powerplants are normally bulletproof," Krohn wrote in a blog for the Indianapolis Motor Speedway's Web site. "I did one stint after Taylor Hacquard had started the race, then another two-and-a-half stints before handing the car over to John Andretti. We were gaining spots overall and we gained five spots overall my last couple of stints. Taylor, John and Jarett Andretti all did a great job to keep the car out of trouble, but with 11 hours down we encountered an issue that was beyond repair.

"Although we didn't finish, I'm so grateful to have been part of this adventure," Krohn continued. "I'd like to say thank you to Mazda USA, Yellow Dragon Motorsports, Window World and PM International Suppliers, all of which played an instrumental role in making this happen. I'd also like to thank John, Jarett and Taylor for doing a great job and for being great teammates. I hope this is just a taste of what's to come for me at Daytona, because I've definitely got unfinished business here!"

Hacquard started the race at 3:30 p.m., and Krohn took over for him at 4:10 p.m. to begin his first stint. He posted consistent lap times and kept Porsche factory driver Wolf Henzler about 6 seconds behind him throughout that stint. Henzler drove the car that went on to finish second in the GT class on Sunday. Krohn then turned the Mazda over to John Andretti at 4:59 p.m.

"It was good!" Krohn said when he climbed out. "I was happy with it considering it was my first-ever stint in a Grand-Am car. The tires were used so I had to be careful, but the traffic was consistent. I just tried to keep out of trouble and justify this opportunity that Mazda has given me."

Krohn felt the Bus Stop chicane was the most challenging part of the course. "People were already dropping wheels off the track left and right and it was dirty there, which certainly was not our strategy," he said. "Everything else wasn't too bad. There are a lot of cars out there but we are all giving each other room, and I'm happy about that."

The next time Krohn was in the car he had the added challenge of the setting sun, but although he couldn't see very well when he was going down the frontstretch he again turned the car back unscathed after his second stint.

Krohn was on deck ready to relieve Hacquard around 9 p.m. for his third period behind the wheel, but Hacquard stayed out only to come in unexpectedly at 9:30 p.m. Krohn was sitting on the pit stand with his parents at the time and he had to leap into action, don his helmet, HANS device and gloves, and climb into the Mazda quickly. Hacquard had been unable to communicate with the team due to an issue with his radio, which caused the scramble. The crew also had to repair the driver's side door and check the engine because an oil pressure light had come on, foreshadowing the future problems.

Krohn made two pit stops under yellow due to the same engine warning light at 10:06 p.m. and 10:42 p.m., but the team carried on and he completed that stint a few minutes before 11 p.m. At that point Krohn said the crew felt a battery voltage issue was affecting the oil pressure.

Unfortunately the problem persisted. John Andretti took the car to the garage area during his second stint but it returned to the track around 11:43 p.m. after some more diagnostics and repairs. The team soldiered on before it was forced to drop out around 3 a.m.