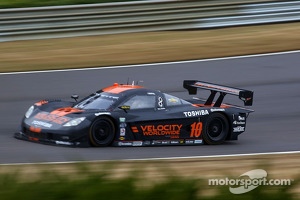 The veteran Italian Angelelli and his 21-year-old first-year co-driver are the most recent winners on the Rolex Series circuit, having executed to perfection two weekends ago at Barber Motorsports Park in Birmingham, Ala. They’ll be looking to make it two in a row at one of America’s most classic road circuits where they’ve enjoyed success over the years in other series.

Angelelli has taken part in Road Atlanta’s prestigious Petit Le Mans four times in his career, which included a solid podium finish with now-team owner Wayne Taylor in a Cadillac Northstar prototype in 2002. He also engineered a dominating pole-to-checkered-flag victory in SCCA Speed World Challenge competition driving a Cadillac CTS-V racecar during his last official visit to the track in 2004.

When Jordan Taylor last set wheels on the beautiful 2.54-mile, 12-turn road course, he co-drove to a solid runner-up finish in last fall’s Petit Le Mans with Jan Magnussen and Antonio Garcia in a General Motors factory GT-class Corvette. And, back in 2008, the year he transitioned from up-and-coming open-wheel racing to the Rolex Series, Taylor scored a pair of pole positions and a dominating victory in the F2000 Championship Series at Road Atlanta.

And, not surprisingly, Wayne Taylor, the three-time sports car racing champion, brings a wealth of experience at Road Atlanta to the table this weekend, having made 16 career starts in International Motor Sports Association Camel GT and American Le Mans Series racing that netted a landmark victory in the very first Petit Le Mans in 1998, along with four other podium finishes.

Safe to say you’re feeling good heading to an old, familiar track after scoring your first win of the season two weekends ago?

“I’m very happy. For everybody on the team, the confidence is very high, the same as it has been in the previous races this year. But winning made us feel we finally got what we’ve been deserving. Now, we go to Road Atlanta, where we will keep our head down and try to take care of business. We have the team that showed an unbelievable performance at Barber, as well as the other two races at Daytona and Austin. Everything finally came together at Barber and we delivered a win. My primary goal this weekend, as always, is to score points and avoid any precarious positions. Again, we are still in the learning process with the new race director, so I’m still trying to sort out exactly what the definition of a low-percentage move is, now, compared to a legal move. Like at Barber, I just hope Jordan will give me the car in such a place so far from everybody else that I can finish the race far away from contact and controversy.”

How was that first victory of the season at Barber from your point of view?

“Jordan and the team did the hard work. They did it all. Jordan put the car in the perfect place at the perfect time before I got in. The team made great calls and had a great strategy. All I had to do was manage the race in a comfortable position. The car was absolutely outstanding, which allowed me to drive within my limits. I could pull away when I wanted, and I managed when needed. It was the perfect scenario, which is very rare in racing. That is the ‘bingo’ – to score a win when the conditions are that perfect.”

You’ve had some good races at Road Atlanta over the years. What do you think of the racetrack?

“The track itself is always a nice place to qualify and race. I’ve always had a good time at Road Atlanta. The last time I drove there was 2004. Driving Road Atlanta in the Daytona Prototype is going to bring me full circle because I went there when the ALMS (American Le Mans Series) was just born, and we are now preparing to race as one with United SportsCar Racing, so going back there next year will be like going back in time. I had a good win with the (SCCA SPEED World Challenge Series) Cadillac in 2004. It was another good, easy win, like we had at Barber. I started from the pole and managed the situation with a great racecar. It was very nice for Team Cadillac, good for General Motors, and it was toward the end of the season which, basically, is always a sweet time to win.”

Your overall thoughts about racing at Road Atlanta this weekend with the Rolex Series?

“I’m really looking forward to racing the Velocity Worldwide Corvette at Road Atlanta. It’s one of my favorite tracks. I had my first big win in F2000 (in 2008). It was a good weekend – two poles and a race win. It was a really, really good weekend. In the Corvette there last fall in the Petit Le Mans, we finished second, so that was also a good race. I’ve always enjoyed driving on the track. Always. I’ve done quite a bit of testing there – IMSA Lites, I tested a Porsche there. It’ll be really similar to Austin (Circuit of the Americas), where different teams ran all sorts of different levels of downforce, trying the find the right balance for the technical sections and the high-speed stuff. Hopefully, we pick the right package for the race, like we did at Austin. We had a very strong car there. The team’s been making great decisions on the engineering side and strategy, and pit stops have been good. Hopefully, we can keep that going this weekend.”

Can you remember your first visit to Road Atlanta?

“I was there when my dad won the very first Petit Le Mans race in ’98. I was 7 years old. Ricky (Taylor, older brother) and I were going around with my mom on one of the team’s scooters. It was really cool.”

Talk about some of the key features of the Road Atlanta track.

“The big thing with Road Atlanta is there’s a little bit of an old-school, danger factor with all the high-speed corners, like coming to turn 12, the last corner, where there’s really not much room for error. Turn 1, you can’t really see around the corner until you’re in the middle of it. It’s got the long back straight, which realistically is the best passing zone on the track, so you have to have a really good run off the tightest corner, which is turn seven, that leads onto the backstraight. With the combination of high-speed and low-speed corners, and the elevation changes, it’s going to be exciting for the fans and it makes things interesting for the teams to come up with just the right setup.”

You scored your first Daytona Prototype-class win two weekends ago at Barber Motorsports Park. How special was that?

“It was really, really cool, but it was a win we feel like we deserved to get earlier in the season. At Daytona, we had quickest car except for the Ganassis. At COTA, we were the quickest car but it was unfortunate what happened to us at the end of the race with the penalty. At Barber, the team made good decisions, good pit stops and had the perfect strategy. We finally won, which I think gives everyone the confidence now that we can put together the perfect race. Everyone believes in themselves. We picked up that momentum at Barber and, hopefully, we can carry it on over to Road Atlanta this weekend.”

It’s the Rolex Series’ first time at Road Atlanta this weekend, but you and various members of the team are no strangers to the place. What are your thoughts as you head back to Road Atlanta?

“For me, I always loved racing at Road Atlanta because it’s just one of those classic, American road circuits. I won there in the first Petit Le Mans and have extremely good memories there over the years. Needless to say, I’m really looking forward to going back there for the first time with the Rolex Series and our Velocity Worldwide Corvette. Road Atlanta obviously has been good to Max and Jordan over the years, as well. Max won in the SCCA Cadillac back in ’04, and we finished on the podium together in the Petit Le Mans in the Cadillac prototype in ’02. Jordan had a great weekend there in F2000 right before he transitioned over to the Rolex Series, and he had a good run in the factory Corvette last year at the Petit Le Mans. All in all, it’s a lot like coming home for a lot of us.”

How do you expect the Velocity Worldwide Corvette DP will take to the Road Atlanta layout?

“Comparatively speaking, it’s a lot like COTA (Circuit of The Americas in Austin, Texas), which means, for us, it should be good. We were not bad at COTA this year – not bad, at all, so I’m optimistic going to Road Atlanta.”

What was it like to finally score the victory at Barber two weeks ago after being denied at the first two races this season?

“It’s always good to win, no matter the circumstances. But that win, in particular, was a huge relief. It might sound wrong, but we’ve felt all along that the team deserved to win at Daytona and COTA. So that made winning at Barber all the more special, especially the way we executed yet another perfect race in terms of strategy and with the guys and their incredible work in the pits, and preparing the car for the race, as well. Now, here we go to Road Atlanta, and you always hope you have more time before the next race because you’re only as good as your next result. Hopefully, we’ll have another good run at Road Atlanta and stay right there in the championship hunt.”