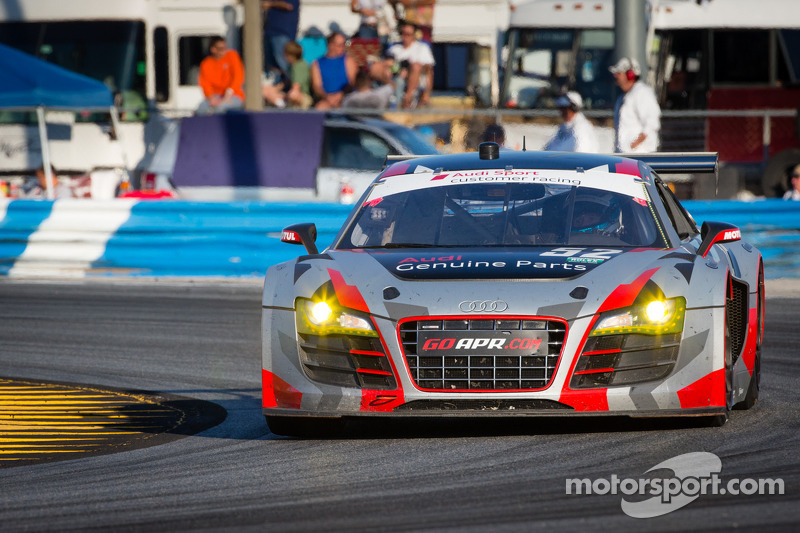 (Daytona Beach, Fla.) - It was a charge from the back for the four drivers of the no. 52 APR Audi R8 Grand-Am. Ian Baas, Marc Basseng, Rene Rast and Frank Stippler's combined efforts brought their silver Audi from three laps down to nearly win the GT race in the 51st Rolex 24 at Daytona. 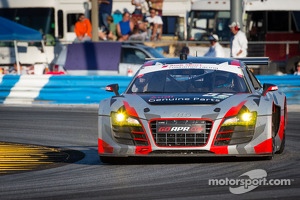 After qualifying tenth, Rast had the no. 52 APR Audi R8 marching towards the front of the field as he ran up to second place in the opening hour. The team's drivers - Rast, followed by Stippler, Basseng, and Baas - were able to run well within the top-10 in the first few hours of the race. However, a penalty incurred by Basseng for an improper wave-by procedure under yellow while the Audi was leading would cause the car do go down two laps - and lose a further lap when Baas was hit by a Daytona Prototype in the overnight hours. Directed by strategist Jeff Mishtawy and race engineer Philipp Mondelaers, the team would work hard through the morning hours to make up the laps, getting back on lead lap with three hours to go.

On the back of strong drives by the team's quartet, the Audi would move up to contend for the lead in the closing stages - running within seconds of the leading cars over the final three hours. The race culminated in a dramatic final hour in which Rast battled with the AIM Autosport Ferrari, Magnus Racing Porsche, Rum Bum Audi, and AJR Audi before crossing the line second, a scant 1.4 seconds behind the winning car. Rast would only take over second position with half a lap remaining, running out of time to overtake the winning Audi R8.

APR Motorsport timed it's final fuel stop to perfection, allowing Rast to race with full power to the finish while other teams ran out of fuel or had to slow down to ensure they would make it to the finish.

"We were pushing like a sprint race," said Rast. "After losing time over the night we had a big fight with the Ferrari and Porsche, and losing by a hundred meters was difficult. It was like a proper sprint race that had nothing to do with endurance. The Audi was great - we had a lack of top speed but the handling in the infield and under braking was very good. It's difficult to lose by such a small margin but we pushed as hard as we could."

Both Marc Basseng and Ian Baas were former class winners at the Rolex 24 at Daytona, but were thrilled to be part of the historic result for APR Motorsport and Audi.

"The balance was not quite right with the car after we were hit twice by prototypes, so I couldn't really attack, but the APR Audi was still very good," said Basseng. "But Rene was the right man to put in the car at the finish because he can get the car to the front. We had to drive very hard to come back from the issues and the penalty early in the race, and it was tough to battle with the Ferrari's and Porsches because they have a top speed advantage. But this race is about staying on the lead lap for 23 hours, and the last hour will be crazy. You can't win this race by running an easy pace because the cars behind can always get their laps back, like we did. It's good racing, I really enjoy it. Thanks to APR and Audi for this great race."

"What an unbelievable day for us and for Audi," said Baas. "It's unbelievable how far the team and the car have come in the last year. Audi stepped up their commitment to the series this year the results were really positive. We knew we had a good race car and even though it wasn't quite perfect by the end of the race, it was still very fast and able to run with the leaders."

Stippler, who drove an APR Audi R8 to second in qualifying at the 2012 Sahlen's Six Hours at the Glen, struggled in his final stint but handed the car over in perfect shape for his teammates.

"My final stint was actually quite difficult," said Stippler. "A front tire was flat spotted and the water temperature was rising with a lot of debris on the front of the car. I just did my best to stay close to the leaders. Rene did a tremendous job. Before the weekend I would have been very pleased with second, but to be this close is difficult. But still, the team and the other drivers did a tremendous job."

APR Motorsport owner Stephen Hooks, praised his team for their work and commitment throughout the 24 hours - as well as the previous twelve months - with the team's R8 Grand-Am program.

"We've been fortunate to have a partner like Audi and to score this kind of result is almost unbelievable," said Hooks. "We've felt that we would be a winning program and to come so close in our biggest race of the year was really nerve-wracking. We came so close to winning but at the same time, this almost feels like a win. We had a very difficult 24 Hour last year and the crew never quit, and they brought that same attitude to this race. They called the right fuel strategy and we battled hard over the final hour. We got held up by some other cars which held us up a bit and we just missed out on the win. It goes without saying that I am really looking forward to the rest of the season."