The BMW experts at BimmerWorld Racing are ready to race at the Indianapolis Motor Speedway.

The BimmerWorld Racing team left the Indianapolis Motor Speedway last year with an incredible 1-2 finish on GRAND-AM’s debut at the famed circuit, claiming the Street Tuner class victory with the BMW 328i platform it has developed since 2006. 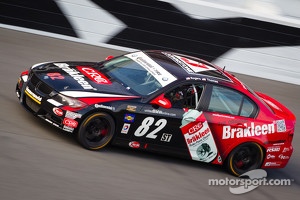 On the series’ return to race on the Indy road course built within the iconic 2.5-mile oval facility, the Virginia-based BMW tuning and aftermarket specialists are gunning for a repeat of the stellar result that was earned in 2012.

But as BimmerWorld owner/driver James Clay shares, while the team is confident going into the event, there are no guarantees of success in a competitive championship like the Continental Tire Series.

”Certainly you can't expect the same results every year at the same tracks, but I do feel that there are trends of some tracks suiting some car models,” he said. ”Similarly, there are trends of models being stronger and less so as the series balances performance. I think the last round of adjustments continued to help the cars already making more power than development gains on the other areas that make a car fast.

”But luckily, there is also a trend of our team digging in and making our own luck and results with a well-developed and well-prepared car and I feel like there is certainly a good chance for a BimmerWorld repeat based on that fact alone.”

BimmerWorld’s 1-2 finish was the highlight of its season, and also put a spotlight on its supremely talented pit crew members and race strategists.

Beyond the excellent performance by its drivers at Indy, BimmerWorld’s staff on pit lane also contributed heavily to the win.

”Last year's Indy race was a crazy combination of the speed that our team and cars brought, and making good calls on pit lane with solid team execution,” Clay explained. ”Strategy always plays a role in results, but last year$rsquo;s Indy is an example where it became pivotal. I think in a normal race we would still have had a similar result, and I am content we can achieve a good finish this year with our team effort with three strong cars, no matter how crazy the race starts to get.”

For Dan Rogers and Seth Thomas, the drivers who piloted the No. 82 CRC BRAKLEEN® BMW 328i to victory at Indy, the upcoming race feels like a homecoming after creating such indelible memories in 2012.

”The Indy win was undoubtedly huge,” said Rogers. ”It is always the race people bring up when they start talking about racing with me, so, in that sense, it is something significant to be remembered. When I occasionally reminisce regarding the race, the memories and thoughts that come to mind are of HOW we won the race, not THAT we won the race. Indy 2012 was truly a team win.

”The crew was spot-on with the car, Wayne Yawn and the engineering staff made the perfect call, given the rain and poor weather, and Seth drove the wheels off the car in changing conditions. In that sense, it makes the victory even sweeter, since the win is shared among the team members.”

BimmerWorld’s Gregory Liefooghe is always a threat to win with teammate Tyler Cooke in the No. 81 BMW 328i, but was unable to finish the inaugural Continental Tire Series race at Indy. The respected touring car ace has been waiting for a second chance to race at the Brickyard, and sees a lot of strengths throughout the program to utilize in his bid for a win.

”Rovals tend to fit the strength of our BMW 328is, and I am optimistic about our chances of a good result at Indy,” he said. ”Last year, the No. 81 ran into some bad luck in the middle of the race, but we showed that we had the speed to join our teammates up on the podium by posting the fastest lap of the race. Tyler has done a great job so far this season, and I am confident he will be running upfront as he usually does, which makes my job easier for the end of the race. Still, the competition will be tough, but the potential for a good result is there.”

The team will have a new addition to the No. 80 BimmerWorld BMW 328i program as Greg Strelzoff welcomes Kevin Gleason to the cockpit for the event. Gleason, who is driving in place of Connor Bloum who injured his leg in an off-track accident, says he&rsdo;s looking forward to driving for one of the elite teams in the GRAND-AM paddock.

”Before I started racing, I watched BimmerWorld race and win,” he stated. ”To join them is an honor, and to be joining them at Indianapolis makes it all the more special. The team is always well prepared and professional which should make my introduction easy. I am looking forward to working with my co-driver Greg and the rest of the team to maximize our chances for a great result.”