Gurney led a lap and joined Fogarty in racing in the lead pack and contending for a podium finish for the entirety of the timed 2-3/4-hour race. The GAINSCO/Bob Stallings Racing crew executed three outstanding pit stops and the team’s race strategy may have paid off with a podium showing if not for a pair of late cautions.

“We didn’t quite have the ultimate pace,” Gurney said. “That was probably the biggest factor today, but the team did a good job overall. Good pit stops and good strategy, as long as we didn’t get those late yellows. I think it was looking like we could have finished second had we not got those cautions.” 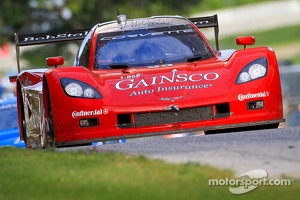 Starting driver Fogarty was at the wheel of the only for the first 30 minutes of the race. A caution at that time saw all of the Daytona Prototype leaders make their first pit stops, and GAINSCO and the other winning contenders also made their driver changes at that time.

“We did run a good race but those last two yellows really didn’t do us any favors,” Fogarty said. “For sure, one of the cars in front of us was going to have to stop and there was actually a question if Pruett in the 01 was going to have to come in again. We were conserving, trying to keep a decent pace, and it was a bit of a chess game out there.”

The fourth-place result moved Gurney and Fogarty to third place in the driver championship standings with 293 points even though they lost ground to the leaders. Sunday’s race winners Jordan Taylor, Max Angelelli and the Wayne Taylor Racing No. 10 extend their championship lead to 304 points and runner-ups Scott Pruett, Memo Rojas and the TELMEX/Chip Ganassi Racing No. 01 moved to second in the driver standings with 296 points.

“We definitely got beat by the 10 car in a big way,” Fogarty said. “Those guys were on fire, congratulations to them but a little disconcerting. “The yellows were not good for us but I am proud of the team. Awesome stops, good strategy in utilizing things that were under our control but ultimately things out of our hands kept us out of the top three.”

The Monterey finish, GAINSCO’s best in three races after eighth-place results at Road America and Kansas, also moved the BobStallingsCars.com No. 99 GAINSCO “Red Dragon” back into the Daytona Prototype Team Championship picture. The No. 01 leads with 315 points, the No. 10 is second with its 304 points and the No. 99 is third with its 293 markers.

“I definitely want to have any shot at the championship and I want to help Chevy win the manufacturer’s championship,” Fogarty said. “It is a good position to be in heading to the finale, we need a lot to happen for us to take the drivers title, but Lime Rock is one of those tracks where anything can happen.”

Race of Champions
Video Inside
General