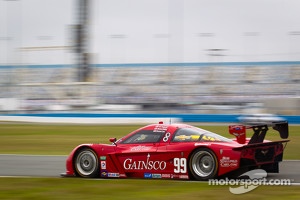 GAINSCO made its Daytona Prototype debut halfway through the 2005 season and has been a fulltime GRAND-AM Rolex Sports Car Series competitor since 2006, first winning the series championship the following year and again in 2010. The team’s best Rolex 24 finish was second in 2008 and GAINSCO/Bob Stallings and its winning lineup of drivers will be shooting for the team’s first victory in the day-long classic later this month, January 26 – 27.

GAINSCO’s runner-up finish in 2008 came with Jimmie Johnson and Jimmy Vasser joining Gurney and Fogarty in the No. 99 GAINSCO “Red Dragon.” Gurney also won the pole with GAINSCO/Bob Stallings Racing for the 2007 Rolex 24.

Preparations for the Rolex 24 began Friday with the opening day of the three-day Roar weekend test. GAINSCO took to a rain-soaked track Friday morning and Gurney managed a top lap time of 2:03.260 (103.975 mph) that ranked third fastest despite the day’s on- an-off misty conditions.

“Early in the day, when the track was wet, Alex was able to put it up there in P3 but as things dried out it didn’t seem like our performance was there,” Fogarty said. “It’s a little frustrating because the car felt pretty good. It kind of felt like it did in last year’s test, but overall pace wasn’t there. We are here to work on a race setup and we are, but we will look at the data and see what we can do. Everything worked well and there were no issues, we just need to find some pace.”

GAINSCO ended up 10th in the afternoon’s second and final practice session that was run in primarily dry conditions. The team had a lap time of 1:44.277 (122.903 mph), 1.359 seconds behind practice session leader Michael Shank Racing’s Ford Riley.

“We will see, we were working on our race setup,” Gurney said. “It seems like we are always trying to work on some straight line speed, but in general the car feels pretty good. We got all of the drivers through the car and we have a long checklist of things that we want to run through, so hopefully it will end up dry tomorrow. I think the forecast is rain for both days, but we will see.”

Law won two races last year at the wheel of a Corvette Daytona Prototype similar to the GAINSCO No. 99 in addition to winning the Rolex 24 At Daytona overall in 2009.

“This is not a race about pushing as hard as you can and going for qualifying laps for 24 hours straight,” Law said. “You got to obviously be there the next morning. You are better off to lose a couple tenths of a second and let someone go than try and push the envelope and get underneath somebody. It’s all about being smart and having guys fresh at the end.”

Gidley partnered Gurney and Fogarty in his No. 99 team debut last year and returns this year as part of GAINSCO’s first four-driver lineup since 2009.

“For me, last year with the GAINSCO team was awesome,” Gidley said. “It’s nice when you come into a group with such attention to detail and that is also focused on working hard. This race is one of those where you start the race and you’re racing guys and, a few hours into it, you realize it’s not really until the end until it really matters. So you have to be able to get into that sort of mode early on, just make sure you have a car at the end, make sure you don’t make any mistakes, have a nice clean race, and at the end be able to race it.”