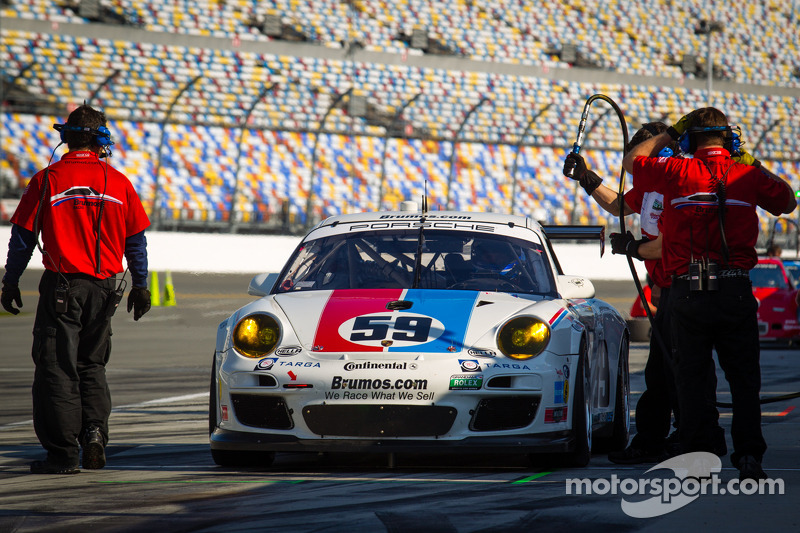 Although the Brumos crew kept the car out of the garage, making the complex repair quickly, the #59 lost several laps.

Jacksonville, FL: There is nothing more unpredictable than endurance racing and in a 24 hour race, it is impossible to foresee what might happen.

With six decades of endurance competition under their belt, Brumos Racing has seen their share of triumphs, but they have also seen many promising efforts fall short. Such was the case in the 2013 Rolex 24 at Daytona, as Brumos faced one challenge after another. 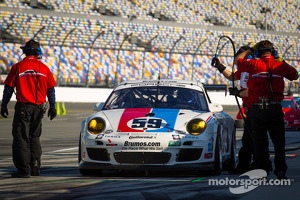 The team gave it their all, keeping the #59 Brumos Porsche 911 GT3 in contention, but a mechanical problem in the closing minutes dealt the final blow to what had been a top ten comeback.

Marc Lieb sustained damage to the rear wing in his evening stint, but the crew got the #59 back on track quickly. Davis also encountered problems when a front tire went down, causing considerable damage to the bodywork and radiator.

Although the Brumos crew kept the car out of the garage, making the complex repair quickly, the #59 lost several laps.

The team persevered through each challenge and the car was poised to take a top ten finish when in the final minutes, a gearbox problem caused the car to lose drivability.

Closing driver Lieb coasted off the track to avoid getting stopped on course. As the race ended, Brumos had dropped into 13th place.

Leh Keen, posting some of the fastest times on track during his stints, appreciated last year’s Rolex 24 podium more than ever, saying, “In 2012 we were dominant and finished 3rd. Although that was special, we were disappointed we didn’t win.

This year showed us just how special that podium really was. This race is so grueling! Some come here just to try and finish, but some come here to win. Brumos is one of those teams that come to win.

It is always tough when we don’t, but today was a bit tougher than we had hoped. Hurley has run 40 of these races and has seen the highs and the lows, but we all understand this is part of the deal.

We will just buff out the famous Brumos #59 and get it sparkling again and be on our way to Texas.”

Andrew Davis, who hoped to deliver a victory, said, “This was a big event for Brumos with Hurley as Grand Marshal. We hoped to provide him a storybook ending, but unfortunately, this year was a real struggle.

I can’t say enough about how hard our guys worked. They were here night after night, putting in hours, changing things at our request and it felt like the race was going to reward us for that.

We have to take this in stride and know it will make us stronger as a team. I am proud of the effort and to be a member of Brumos Racing and to represent the Brumos Companies.

I just want to thank everyone for their support and promise we will give them some great results in the future.”

Brumos’ newest driver, Bryan Sellers, faced the challenge of the pre-dawn stint made doubly difficult by heavy fog that blanketed the track, resulting in an extended full course caution.

Sellers said, “It was just a tough 24 hours all around. We faced so much through the course of the race but the guys never lay down. It looked like we were going to fight our way back, but there was just nothing that could be done at the end.

A win would have been a great way to honor Hurley, but sometimes things just don’t go your way. We fought hard and had a good opportunity at it, so we can all be proud, take what was learned, and get ready to have another run at it next year.”