For Carter and Plumb, racing at Lime Rock is like racing at home since they live only 230 miles from Lime Rock and can be considered as "local" competitors.

B+ Foundation racers and Ambassadors are heading to Connecticut for the final round of the 2013 Continental Tire Sports Car Challenge. For Carter and Plumb, racing at Lime Rock is like racing at home since they live only 230 miles from Lime Rock and can be considered as "local" competitors. This event will mark the final GRAND-AM CTSCC race sanctioned by GRAND-AM, a racing organization established in 1999. In 2014 IMSA will replace GRAND-AM and be the sole sanctioning body for the CTSCC and the new Tudor United SportsCar Championship.

Launched three years ago, The B+ Foundation racing program has been very successful and will celebrate three years of racing on Saturday. Al Carter and Hugh Plumb will compete in their 31st and final race together with the Fall-Line Motorsports BMW this weekend at Lime Rock Park. In three seasons, Carter and Plumb scored 16 top ten finishes including eight top five with three podium finishes. The program brought tons of exposure to The B+ Foundation and other partners Eagle Technology and Jetset Magazine and this weekend again, the two B+ Racing racers will do everything they can to score another top on track result. 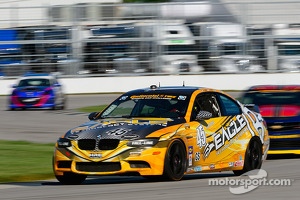 Photo by: SceneTap B+ Racing

This weekend will also mark the final race of the Rolex Sports Car Series, a series that started in 2000 at the Rolex 24 At Daytona. Al Carter has competed in 8 Rolex Series races since 2011 including three races with the Fall-Line Audi R8. This weekend Al will be behind the wheel of the No. 46 B+ Foundation Fall-Line Motorsports Audi R8 GRAND-AM in the GT class where he will co-drive with GRAND-AM racing veteran, Eric Lux. The Lime Rock Park racetrack should be a great circuit for the R8 and Fall-Line and its drivers will try to score a podium finish in this historic race.

As part of the 2013 "B+ Racing Fighting Childhood Cancer Tour" Al Carter and Hugh Plumb will visit the Connecticut Children's Medical Center on Thursday in Hartford. This is the third year that the two B+ Foundation drivers and Ambassadors meet children batting cancer at that hospital. This visit is more significant than ever because we are in September and this is "Childhood Cancer Awareness Month". Last night, The B+ Foundation Golf Outing Dinner and Auction held at the famous duPont Country Club in Wilmington, Delaware brought almost $50,000 to The B+ Foundation, thanks to Al Carter who acted as the official auctioneer for the evening. Multiple donated items were sold to the highest bidders including paintings of French artist Erwin Dazelle who came from France to execute a "Live performance" during the dinner.

For this final 2013 CTSCC race, the two classes GS and ST will be split. The GS race with the No. 45 Eagle Tech / B+ Foundation / Jetset Magazine BMW M3 will race on Saturday morning. Al Carter raced a lot of Skip Barber events there and likes the 1.5-mile, 7-turn road course of Lime Rock Park and is looking forward for this final race of the season. "I am excited about going to Lime Rock Park with our Fall-Line Motorsports team for this final race of the season," said Carter. "We had a good CTSCC season but too many bad finishes and a big amount of bad luck. This is my final race with my friend Hugh Plumb in the No. 45 Fall-Line BMW and for me it is a bitter and sweet thing. We had so many great moments together including three podium finishes and we did such a great job to promote the fight against childhood cancer but I am moving forward to 2014. I am expecting that Hugh and I will do well on Saturday then we can celebrate."