DETROIT - (September 25, 2013) – The 2013 GRAND-AM Road Racing season finale at Lime Rock Park in Lakeville, Connecticut will play host to tight championship battles. Chevrolet drivers and teams in both the Rolex Sports Car Series Daytona Prototype (DP) and Grand Touring (GT) classes will take on the challenge of the 1.53-mile, seven-turn road course in pursuit of the season’s ultimate goal – a championship. During the two hour and 45 minute Rolex race to decide who is crowned this year’s champions, each of the Team Chevy drivers knows that not only are the team accolades on the line, but also the coveted Manufacturers’ Championships for Chevrolet.

"Lime Rock is a shorter track with tight corners followed by rather long straightaways,” said Jim Lutz, Chevrolet Program Manager, Rolex Sports Car Series. “It is always a question of give and take in getting the right balance for the corners and the speed needed on the straights. Our Team Chevy crews and drivers will be well prepared for the battle. 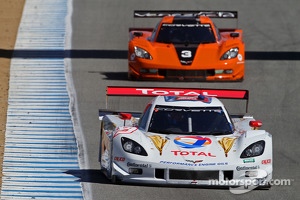 "This weekend's race will be intense for the Chevrolet teams and drivers, especially in Daytona Prototype. There is a very tight point’s battle for both driver and team championships with three of our Corvette DP teams and drivers in the thick of it. Excellent performance and perfect execution is what the teams will strive to attain in order to bring home the championship for their team, drivers’ and the Manufacturers' Championship for Chevrolet.

“In GT, Stevenson Motorsports GTR Camaro is within striking distance of driver and team championships if racing luck falls their way. The No. 57 team has worked hard on preparations for this critical race.”

The pairing of Jordan Taylor and Max Angelelli lead the pack for the 2013 DP drivers’ title as the Series rolls into Lime Rock Park. Taylor and Angelelli won the two most recent races in Wayne Taylor Racing’s No. 10 Velocity Worldwide Corvette DP and enter the finale with an eight-point lead. The duo can clinch the title with a fourth-place finish at Lime Rock Park.

History is on the side of Taylor and Angelelli at Lime Rock. Wayne Taylor Racing has been undefeated since DPs began racing at the circuit in 2010. But two other Corvette DP teams are also in the hunt for the drivers’ championship. Alex Gurney and Jon Fogarty, No. 99 GAINSCO Auto Insurance Corvette DP, are only 11 points back while co-drivers of the No. 5 Action Express Racing Corvette DP, Christian Fittipaldi and Joao Barbosa are still within striking distance sitting 13 and 15 point’s out of the lead position.

Another title on the line at Lime Rock is the DP team championship. Wayne Taylor Racing currently sits 11 points behind the leaders. A strong finish at Lime Rock could mean a double victory for the team.

Chevrolet heads into the final Rolex race of the year leading the Rolex Daytona Prototype Engine Manufacturers’ standings by 32 points. Not only are the Chevrolet Corvette Daytona Prototype drivers and teams in a tight championship battle, but co-drivers John Edwards and Robin Liddell have a GT class-high four victories in the No. 57 Stevenson Auto Group Chevrolet Camaro, and enter the finale 11 points behind the leaders in both the driver and team championship standings.

Liddell and Edwards know a bit about winning at Lime Rock Park – they’ve each won two races on the 1.53-mile course, and at least one of them has been atop the GT podium for the past three years.

The duo will defend their 2012 Lime Rock victory this weekend and will be joined by teammates in the No. 75 Chevrolet Camaro Jan Magnussen and Antonio Garcia. The Corvette Racing drivers won last weekend’s GT class in the ALMS race at Circuit of The Americas, taking the lead in the championship in the process.

Chevrolet sits third in the Manufacturers’ standings, but a strong run can substantially change the final standings.

This weekend at Lime Rock Park also marks the last race of the season for the Camaro GS.R drivers and teams in the Continental Tire Sports Care Challenge series. Matt Bell and John Edwards led the way for Team Chevy on the strength of two wins in 2013 at Road Atlanta and Kansas Speedway. Headed into the weekend’s race the driving duo are 34 points out of the lead in both the driver and team standings, but a misstep by the leaders could mean a big day for the No. 9 Stevenson Camaro GS.R drivers.