Championship revs up for Rum Bum Racing at Laguna Seca

With just two races remaining in the 2013 championship, Rum Bum Racing enters the race weekend firmly atop the standings with a 51-point lead.

Orlando, Fla. – After winning the 2012 GRAND-AM championship in the season-finale race at Lime Rock Park last year, Rum Bum Racing had one goal for the No. 13 in 2013: repeat.

And the team could do exactly that this weekend at Mazda Raceway Laguna Seca as the Joe Varde-led group holds a point advantage that could see the group clinch the championship title with a finish of 11th or better in Sunday’s race. 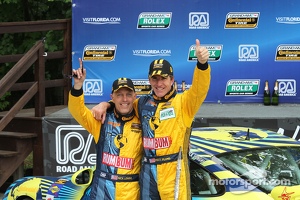 With just two races remaining in the 2013 championship, Rum Bum Racing enters the race weekend firmly atop the standings with a 51-point lead. Drivers Matt Plumb and Nick Longhi also lead the Driver Championship by the same margin.

In a season that has seen Rum Bum Racing travel to a range of tracks as varied as the wide open spaces of Road America and the tight confines of the Kansas Speedway roval, consistency has been key. Rum Bum Racing has won three races this year (Barber, Mid-Ohio, Road America) and has finished among the top-five in all but one race (the team finished 10th at Road Atlanta).

The No. 13 Rum Bum Racing Porsche has completed all of the race laps in 2013 and has led laps in seven of nine races for a total of 91 laps led. These impressive stats have seen Rum Bum Racing at the top of the championship standings throughout most of the year.

As Rum Bum Racing returns to race action this weekend at Laguna Seca, the group takes to a track where it has been strong before. While driving the No. 13 BMW in Rum Bum Racing’s Laguna Seca debut in 2011, Longhi and Plumb drove to a podium finish of third.

In last year’s race, the Rum Bum squad looked well on its way to another podium finish in the No. 13 Porsche until a curious and confusing call from GRAND-AM came after Plumb followed the leading car to the green on one of the final restarts.

The leading car as well as Plumb was forced to pit road to serve a stop and go penalty with just six minutes remaining in the race, and with that, Rum Bum Racing relinquished a sure podium finish and a possible win.

While Rum Bum Racing looks for redemption this year, the group maintains its championship goal. Just as the team as done all season long, Rum Bum will focus on collecting points with a clean and straightforward race around the 2.238-mile California circuit.

“We’ve been really focused on the championship, ever since last year when we first started working on plans for the 2013 season,” said Plumb. “But now that we are so close, I have to admit that I don’t want to think about it at all! Hopefully we can just have a clean race and just see where we come out.

Joe (Varde) has all the guys really focused as usual, and we will just look to come in and execute on our plan, the same way we’ve done every weekend this year. ”

The race weekend begins with a promoter test day on Friday. Official practice will take place on Saturday with the 15-minute GS qualifying session set for Saturday at 4:00 PM (PST). The 2.5-hour Continental Tire Sports Car Festival event will go green at 10:00 AM (PST) on Sunday.