Darren Law and his Action Express Racing teammates notched a fifth-place finish in the Rolex 24 At Daytona on January 28 and 29. Law (Phoenix) and his co-drivers David Donohue (Malvern, Pa.) and Christian Fittipaldi (Key Biscayne, Fla.) overcame some new-car woes to post the highest finish for the new Corvette Daytona Prototype in the first race of the season at Daytona International Speedway in Daytona Beach, Fla. 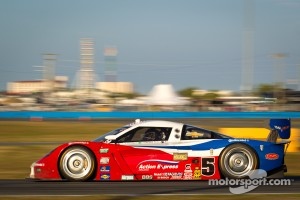 Law started the No. 5 Action Express Corvette at the back of the 14-car prototype grid after missing the qualifying session due to an engine issue. He reported an engine misfire at the green flag and returned to pit lane for a new electronic control unit (ECU) for the engine. But the misfire continued until the team's engineers were able to reload the engine program after eight hours of the race.

"This was a very hard race," Law acknowledged. "Even the leadup to the race was tough for us, because we had an engine issue in the practice just before qualifying and didn't get to qualify. On the first lap, we had a heavy misfire and came in. The team changed out the ECU, which cost us a lap. We spent the first eight hours with that same misfire, trying to work through it. Eventually, we put in a whole new engine program, reloaded the entire system. That seemed to get rid of the misfire, but I don't know that we produced as much horsepower as we should have."

Law, Donohue and Fittipaldi all drove triple stints throughout the race, turning in a flawless performance that was matched by excellent pitwork from the Action Express crew.

" I've got to commend my teammates, David Donohue and Christian Fittipaldi. We went with three drivers this year and all of us went trouble-free for the entire 24 hours," Law said. "It was a long, hard race for us, fighting through some issues, but the team persevered, the Chevy guys did a great job, the Pratt & Miller guys did a great job on the new car. I think we've got a lot of potential for future races."

Off-track, Law is chief operating officer for the Bob Bondurant School of High Performance Driving. He received some pre-race tips from his boss, Bob Bondurant.

"I gave media rides on Saturday morning, the morning of the race, in the Chevrolet pace car," Law explained. "I took both Bob and Pat [his wife], so Bob gave me a few pointers as I was going around the banking before the start of the race. He liked the first ride so much, he went to the back of the line and got back in again and did another lap with me on the track!"

Law was happy to lead the Corvette contingent in the season-opener for the 2012 Grand-Am Rolex Sports Car Series.

"I think we're a little behind the eight-ball here because everything is new – body, engine, chassis – so we're on a steep learning curve. But we learned a ton of stuff this weekend," he said.

"Although, of course, we wanted to win, the next goal was to be top Chevrolet, which is what we did. Coming out of the 24-hour with fifth-place points is good. It's a reasonable start to the season – a lot of other guys had a lot of other issues and didn't fare as well as us, so we're looking forward to getting on with the season now."