Law and the BSR Corvette-powered DP finished 7th after an electronic failure took away a podium finish.

Darren Law has a new respect for steering wheels, after an electronic failure dropped him and the GAINSCO/Bob Stallings Racing team from podium contention in the 2013 Rolex 24 At Daytona. The Phoenix driver joined Jon Fogarty (Bend, Ore.), Memo Gidley (Novato, Calif.) and Alex Gurney (Irvine, Calif.) behind the wheel of the team's No. 99 'Red Dragon' Corvette-powered Daytona Prototype for the 24-hour race at Daytona International Speedway in Daytona Beach, Fla., on Jan. 26 and 27. The race was the season-opener in the Grand-Am Rolex Sports Car Series. 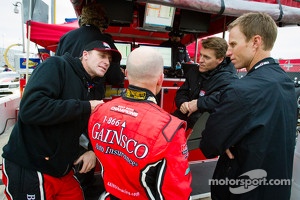 Gurney drove the first race stint, starting from eighth on the 57-car grid. Gidley, Law and Fogarty followed, moving up to third after six hours of the 24-hour enduro. But trouble hit 90 minutes later, during Gurney's second stint, forcing several trips to the garage for repairs.

"We had an electrical problem," Law explained. "The motor was cutting in and out, and we had problems with the shift lights. The crew changed the ECU [electronic control unit] and several electronic pieces, but we still had the problem. Because it involved the shift lights, which are contained in the steering wheel, they decided to change the steering wheel. It's not the first thing you think of when you have electronic issues, but after they went through everything and couldn't find the problem, they deduced that was the only thing left that it could be.

"As soon as they changed the steering wheel, everything was solved and the car ran flawlessly the rest of the race. The car was competitive, there's not a scratch on the car, we had perfect pit stops and driver changes were good. We had no issues other than that one electrical thing."

Although they had dropped back to 12th in class, 18 laps behind the race leader, the team persevered. They regained four laps and worked their way to seventh at the checkered flag, earning valuable points for the Rolex Series championship.

"It was a great experience," Law noted. "The GAINSCO guys are a terrific team; it's well-run and the car is well-prepared. The other drivers and I got along like we'd been working together for years and Bob Stallings is such a class act. I was very thankful to be invited to run with them."

Law hopes to compete in additional endurance races this season, but his primary focus will be on the Bob Bondurant School of High Performance Driving, where he is chief operating officer. Before he returns to Phoenix, though, he has a tradition to honor – celebrating his wife Karrie's birthday in Daytona Beach.

"My goal tonight is to have a nice, quiet, short dinner with Karrie," he said. "Then I'm going to sleep! It's going to be a pretty boring birthday for her, but it is every year. We'll celebrate again when we get home."