Darren Law is ready for a race-car driver's dream – five races in five weeks, on two continents, in both prototype and GT cars. It doesn't get any better. 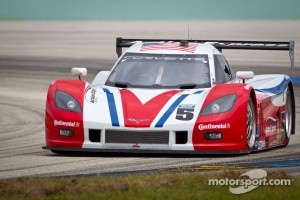 The Phoenix driver will start with the Chevrolet Grand-Am Detroit 200 on June 2. He will drive the No. 9 Action Express Corvette-powered Daytona Prototype in the two-hour Rolex Sports Car Series race on the Belle Isle circuit in Detroit. Law's success on the 2.1-mile track includes a win in the North American Touring Car Championship in 1996 and an American Le Mans Series GT2 podium finish in 2007.

"It gives the team two separate cars with drivers who are in the chase for the points championship," Law explained. "This will be a very different race for me since I've been driving with David since 2004. And it's the first time I've had a different co-driver in the Daytona Prototype program. But João has been a teammate of ours for a long time. I've worked with him for many years and we work well together."

Street circuits aren't favored by many drivers, but Law is drawn to them. "Belle Isle is a bumpy track, but it's technical, it's challenging," he said. "I love the challenge of street courses. People seem intimidated by the wall, but I don't have an issue with running in the tight corners. I'm just comfortable on street courses, always had success on them."

Following the Detroit race, Law will travel to Mid-Ohio Sports Car Course (Lexington, Ohio) for another Rolex Series race on June 9. From there, he's off to Europe for les 24 Heures du Mans (Le Mans, France) on June 16 and 17, where he will drive the No. 79 Flying Lizard Motorsports Porsche 911 GT3 RSR with Seth Neiman of San Francisco and Spencer Pumpelly of Atlanta. Then it's back to North America for Rolex Series races at Road America (Elkhart Lake, Wis.) on June 23 and Watkins Glen International (Watkins Glen, N.Y.) on July 1.

Law will also continue to cover his duties as chief operating officer for the Bob Bondurant School of High Performance Driving in Phoenix, albeit electronically.

"Obviously, I've got great support within the company," he noted. "And we have constant contact through text and email. It's the toughest month. With everything going on at the school, too, it makes it very busy, but we learned to manage through it last year, so we should be okay this year."