Darren Law finished third in the 2012 Grand-Am Rolex Sports Car Series Daytona Prototype championship after a strong season behind the wheel of two Action Express Racing Corvette-powered Coyote race cars. The Phoenix driver was the highest-finishing Chevrolet Corvette driver in the series, with wins in two major races, at the Detroit Grand Prix and the Six Hours of Watkins Glen (International) in New York, and a podium finish at Homestead-Miami Speedway. 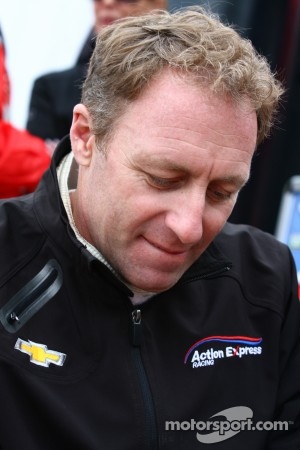 "This was a really challenging, but rewarding, season," he said. "We came into the season not only switching manufacturers from Porsche to Chevrolet, but we also switched bodywork to a brand-new Chevrolet Corvette body, and we also switched chassis from Riley to Coyote. So out of all the teams, we probably started the season with the most unknowns. We had a lot of development work, so to come through all that and finish third is a great accomplishment."

Law started the year in the No. 5 Action Express Corvette with David Donohue of Malvern, Pa. Law then moved to the team's No. 9 Corvette, sharing driving duty with João Barbosa of Porto, Portugal. After racing both team cars with different co-drivers and crews, Law noted his third-place finish was bittersweet, but a credit to the entire Action Express team.

"Finishing third in the championship is great, but it's also somewhat bittersweet," he explained. "I drove two different cars within our team, and I had different teammates in David and João, so it's almost like those guys should be there with me because they helped me get the points. Racing is a team effort, but this was every team member within Action Express Racing – drivers, crew and engineers on both cars."

2012 was busy off-track, too, as Law completed his first year as chief operating officer of the Bob Bondurant School of High Performance Driving. He said the double load was challenging, but worthwhile, as his race success created a positive side-effect for the Phoenix school.

"It's been tough, both on my family and myself, trying to do both programs, to race fulltime as well as work fulltime," he acknowledged. "The school has been very accomodating and understanding with my racing career. I think it's actually been good for the school having an officer of the company racing professionally and racing a Chevrolet – Chevrolet is the manufacturer that supports the school, as well.

"It's been a long year for me and it's been tough because I'm either out of town at a race track or I go into the office now every single day. I've had far less time this year at home than I have in the past. I've got to thank my family for putting up with all of this and supporting me throughout the season."

Law and his wife Karrie will travel to New York City for a rare day off before they attend the Rolex Series awards banquet on Monday evening. Law will then return to Phoenix to evaluate race options for 2013 – with a new piece of hardware for his trophy case!