Darren Law of Phoenix celebrated his second podium finish of the season on May 14, after powering his way to third on the last lap of the Grand-Am Rolex Sports Car Series race at Virginia International Raceway in Alton, Va. Law and his co-driver, David Donohue of Malvern, Pa., are now third in 2011 series championship standings after four of 12 races.

Donohue started the No. 5 Action Express Porsche-powered Daytona Prototype fourth of 27 cars on the Virginia grid. With most of the first hour of the 2.75-hour race run under caution due to heavy rain, track opportunities were limited. But Donohue moved up to lead the race just past the one-hour mark and held the point until he was knocked off track by another competitor and slid back to fourth. 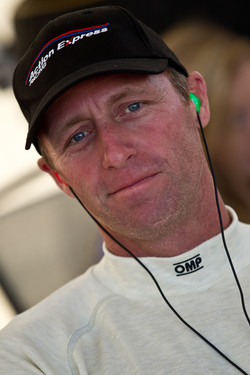 "David got bumped and pushed out wide in turn one, so we fell 'way back. The grass was just so slippery, if you got off track, you were done. From that point on, we were playing catchup," Law said. "But we had a great run; the car was handling good."

Law took over mid-race and moved from fifth to second before his final pit stop for fuel and tires. He returned to the track sixth and regained two positions, slowed by numerous caution periods. He finally got an extended run and made the pass for third on the last lap.

"It was just horrible conditions – the track was wet, it was a one-line groove, there was mud everywhere. You couldn't go more than a couple of inches offline to pass because then you'd be in the wet," he noted.

"As it started drying out, it was a little frustrating because I felt like I was faster than [then third-place] Max Angelelli on the long runs, but every time I started to gain on him, we'd get another yellow. I was glad to have the last seven laps under green. That's what gave me the chance to reel him in and get by."

The result gave the Action Express team a double podium, with a win for the No. 9 Daytona Prototype and third for Donohue and Law in the No. 5 car.

"It was a crazy weekend, but a great race and a great team result," Law said. "The whole Action Express program has really stepped up and we've had a good start to the season. One of our cars has been on the podium three of the last four races, and now we've had both cars on the podium for the first time this year. I feel like we're real contenders and we're just getting better every weekend."

Darren Law drives the No. 5 Action Express Racing Porsche-powered Riley Daytona Prototype in the Grand-Am Rolex Sports Car Series and the No. 44 Flying Lizard Motorsports Porsche 911 GT3 RSR in the American Le Mans Series GT class. The versatile Phoenix driver is also the chief operating officer of the Bob Bondurant School of High Performance Driving and a partner in the Thermal Motorsports Track and Club (thermal122.com). He is supported by CDOC (cdoc.com) and OMP Racing (ompamerica.com).