Daytona, Florida – January 26th, 2012 – Davy Jones and the Godstone Ranch Motorsports team will start the 50th anniversary of the Rolex 24 at Daytona from the 32nd spot on the GT grid of the GRAND-AM Rolex Sports Car Series after teammate Mark Thomas turned a lap of 1m52.250s in their #18 Texas Heart Institute / Godstone Motorsports Ranch / Porsche GT3 Cup. 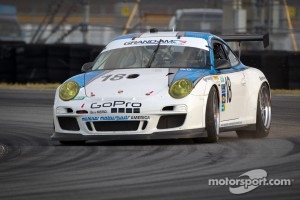 After missing the valuable testing time of the Roar Before the 24 earlier this month, Jones and his team have had to quickly adapt to a new car while dealing with the heavy traffic of the impressive 60-car GRAND-AM field that has gathered for this year’s 24hr race.

For Jones his only experience so far behind the wheel of his Porsche GT3 Cup machine came this morning during the first official practice session where he had a chance to do a handful of laps and acclimate himself with the new car. He will be back on track for night practice tonight as the Muhlner Motorsports America operated team continues to work on their race setup for the grueling endurance event. There will only be two more practice sessions on Friday before the cars are taken back to the garage to go through the final preparations before the race.

It will be a busy weekend for Jones off-track as well as he will be attending various celebrations commemorating the past Champions of the 50-year old event, him being the overall victor of the 1990 race.

The green flag for the 50th anniversary of the Rolex 24 at Daytona will drop this Saturday January 28th at 2:30pm Eastern time and the race will be broadcasted LIVE on SPEED. For up to the minute updates please follow www.twitter.com/davyracing and for more information you can visit www.davyracing.com. For live timing during the on-track sessions you can visit www.grand-am.com.

“Today our plan was just to go out and run laps, get the drivers up to speed and just start focusing on the race. We knew that we weren’t in a position to qualify up front so we decided to not worry about that and just concentrate on making sure we have the strongest package for 24 hours.

With 48 GT cars and all the DPs out there its pretty busy, obviously I would’ve preferred to have been in a different situation coming in here and with some testing under our belts, it’s been a steep learning curve but we have a great team and a very strong group of drivers and I’m sure that once the race gets going we’ll be a contender.”

Asian LMS to be included in Motorsport Mundial