Atlanta, Ga. – Luis Bacardi’s Rum Bum Racing got knocked back, but didn’t fall down. Drivers Matt Plumb and Nick Longhi suffered two tough hits and some bad luck in pit lane during Round 4 of the GRAND-AM Continental Tire Sports Car Challenge at Road Atlanta, but that didn’t keep the team from retaining the championship points lead. 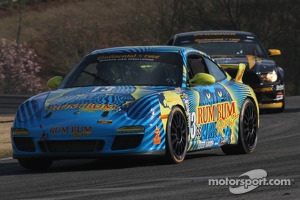 Longhi opened the PWC 250 at Road Atlanta event from the pole after Friday’s qualifying session was rained out and the grid was set by championship point order.

Showing strength from the drop of the green flag, the No. 13 immediately pulled out a two-second advantage over the 60-car combined class field.

But just four laps into the 2.5-hour event, the GS field encountered the slower ST traffic and a pack of cars began to catch the No. 13.

Longhi found himself in a battle for the point with the No. 55 but unfortunately his very strong run was thwarted when the No. 55 punted the No. 13 Porsche out of the lead with Longhi falling to eighth in the order.

“It is such a shame, because the first 10 laps were great,” offered Longhi. “I was running a pace that would preserve the car because you know you’re going to catch traffic.

Everything was going according to plan until the contact from the 55 car. The car was great – it was really hooked up and we had a good lead. I just don’t know what he thought he was doing there.”

The Rum Bum squad didn’t let the setback slow them down as Longhi was back to fourth prior to the team’s first pit stop with 45 minutes completed in the race.

Ready to make a traditional fast Rum Bum pit stop and driver change, Longhi brought the No. 13 to pit lane only to find the bad racing luck continue when tow trucks on pit road forced him to come to a complete stop and excruciatingly wait while several other cars who had already passed the trucks were able to make their pit stops and return to the track.

Once finally in the pit box, the Rum Bum crew delivered a lightning fast pit stop, but the track position had already been lost and Plumb restarted from the 15th position.

Despite the fact that the Porsche was losing a bumper due to the early-race contact and slowing the car considerably as it acted like a parachute, Plumb once again began a relentless charge through the field during the second half of the race to challenge for the fifth position with just under 20 minutes remaining.

But that strong run was again halted when a competing BMW misjudged his braking distance taking to the grass (which was wet from Friday’s rain storms) and only slowed down by hitting the No. 13 Rum Bum Racing Porsche.

Following the hit, Plumb fell to 10th in the order and the track immediately went yellow for another on-track incident. The race would finish under the yellow and Rum Bum Racing settled for 10th at the finish.

“We came away with some points, but we definitely had bad luck today,” said Plumb. “We lost a ton of track position when the two tow trucks stopped us in pit lane. I went back out and for as good of a car as we have there is nothing you can do against all the torque and horsepower out there.

Where we’re quickest there is no usable space on the racetrack to pass. Towards the end we were challenging for fifth and I felt like we could have maybe made it up onto the podium, but then boom, contact from the No. 48. This track just breeds impatience. All in all not a great day, but you can’t win them all.”

Podium and points for Starworks Motorsport at Road Atlanta