DP Driver Championship up for grabs

10 drivers separated by 5 points with 2 races to go, who will step up and claim the prize?

To say it's crowded at the top would be the understatement of the 2013 GRAND-AM Rolex Sports Car Series season.

Ryan Dalziel calls it "perfect timing" on the eve of the Rolex Series merger with the American Le Mans Series presented by Tequila Patrón.

"It further builds the credibility of the Daytona Prototypes and their drivers," said Dalziel, who shares the cockpit of the No. 2 Starworks with Alex Popow BMW/Riley with Alex Popow. The pair is third in driver standings, three points behind the leading duo of Jordan Taylor and Max Angelelli. 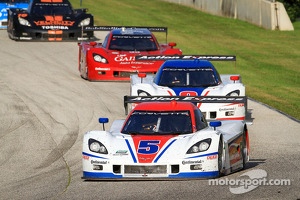 "I have been racing off and on in GRAND-AM since 2003, and not only the level of drivers, but also the level of teams and their preparation is just radically different," said Christian Fittipaldi, two points behind Taylor and Angelelli. "It is just so much more competitive."

Dalziel, who finished second in DP points a year ago, said all of the DP teams have stepped it up this year. A Scot living in Orlando, Fla., Dalziel is focused on winning a title as a Pro-Am team – the only one of the top contenders with a gentleman driver in the lineup. "We'd like nothing better than to beat the pros," he said.

None of the contending teams have been able to avoid trouble, keeping the standings tight.

Only Fittipaldi and Joao Barbosa have been able to fashion back-to-back victories but the No. 5 Action Express Racing Corvette DP followed its second win at Watkins Glen International with a finish of 14th at Indianapolis. Popow and Dalziel likewise have a 14th on their season record while reigning DP champions Memo Rojas and Scott Pruett suffered the worst disappointment – no points scored in the Belle Isle round after an early-race accident claimed the No. 01 Chip Ganassi Racing with Felix Sabates BMW/Riley. The Ganassi drivers remain just five points out of first place. 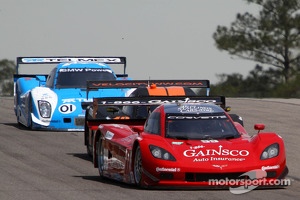 Teams that weren't contenders in the past have elevated their performances this season according to Jon Fogarty, who shared 2007 and 2009 DP titles with Alex Gurney in the No. 99 GAINSCO/Bob Stallings Racing Corvette DP.

"The series has come a long way in the last couple of years," said Fogarty. "People are rising to the challenge."

Among them is 22-year-old Taylor, whose Kansas Speedway victory in the No. 10 Velocity Worldwide Corvette DP he shares with Angelelli, pushed the pair into the championship lead.

The younger Taylor finished second in the 2011 GT championship, losing the title by two points to Leh Keen and Andrew Davis.

"It was very tight in the last few races; my first time being involved in a professional fight," said Taylor. "I'm glad I have been through a similar situation in my career. I now know and have a great idea of what to expect the next two races and understand what we need to do to keep fighting."

Taylor doesn't believe any one team or set of drivers has the inside track to this year's title.

"Everyone in this championship can win races and win the championship; everyone," he said. "It is now just down to who has the best final two races. Whichever team executes the best and has the fewest mistakes will come out on top."

Race of Champions
Video Inside
General