Ferrari is back in the series in a big way

Ferrari Is Back In GRAND-AM … In a Big Way; Famed Italian Manufacturer Has The GT Lead – And The World’s Attention 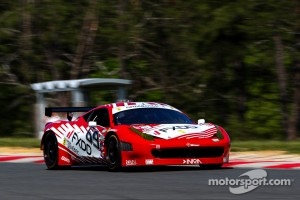 DAYTONA BEACH, Fla. (May 16, 2012) – Ferrari is back in GRAND-AM, and the sports car industry is taking notice. Joining the Rolex Series in 2012 with a model built specifically for GRAND-AM competition – the new Ferrari 458 Italia Grand Am – Ferrari has won consecutive races to take the lead in the GT class championship standings.

Back-to-back victories at Homestead-Miami Speedway and New Jersey Motorsports Park put Ferrari atop the Rolex Series GT manufacturer’s championship. The latter victory broke a tie to move the Italian automobile manufacturer into the championship lead over Porsche, 128-123, with Mazda third at 117.

“Hearing about success for Ferrari always makes me happy,” said Andretti, whose laurels include a victory in the 1972 Rolex 24 At Daytona.

“Ferrari is so magical … the name resonates around the world. When Ferrari scores, I think everybody is happy. I certainly have a soft spot for them. I love when Ferrari is successful.”

"To have the Ferrari brand successful again in the Rolex Series has both present and future implications," said Mark Raffauf, GRAND-AM’s managing director of racing operations. "Ferrari racing – and winning – shines a spotlight on the Rolex Series both in North America and Europe. It helps the current competitive environment, and it bodes well for the environment in coming years.

“Right now, it’s really nice to see how competitive GT has become with the mix of our traditional cars as well as the inclusion of the new European cars such as Ferrari. GT racing these days is spectacular in GRAND-AM."

Jeff Segal and Emil Assentato of AIM Autosport Team FXDD won their second straight GT race in Sunday’s Global Barter 250 presented by Susan G. Komen for the Cure at New Jersey, co-driving the No. 69 Ferrari. The pair leads Magnus Racing’s Andy Lally and John Potter by eight points in the driver standings, 125-117 – the same margin for AIM over Magnus in the GT team championship.

“It’s been truly gratifying to be part of the whole experience since we started with Ferrari,” Segal said. “Seeing everything come together as quickly as it has – and as well as it has – is just incredible. There are many people in Italy who have worked hard to make this project a reality.”

Segal, whose family once owned a Ferrari dealership in Philadelphia, became the youngest winner in the GRAND-AM sanctioned Ferrari Challenge when he won at Homestead-Miami Speedway in 2003 at age 17.

“I've been linked with the Ferrari brand since I was a kid,” Segal said. “Ferrari is a company with a huge international standing and huge brand awareness. Everyone around the world knows who and what Ferrari is. But as a company, it's quite small. It's really a family feel.”

The new Ferrari 458s started the year with a flourish, with three entries in the season-opening Rolex 24 At Daytona, led by fifth-place finishers Toni Vilander, Olivier Beretta and Andrew Bertolini in the Risi Competizione entry. After finishing eighth in the Rolex 24, Segal and Assentato placed second in the Porsche 250 at Barber Motorsports Park, a preview of things to come at Homestead and New Jersey.

Segal and Assentato – the 2010 GT champions when they co-drove Mazdas – will try to pad their lead on June 2, when the Rolex Series season resumes at Raceway Belle Isle Park in Detroit.

““We have just an unbelievable resource with our partner in Ferrari,” Segal said. “This car is built special for the Rolex Series but it is still heavily based on the GT3 car, and there are 40 of those in the world. We have a lot of support and we are learning a lot.”