NASCAR’s Bowyer quickly up to speed in AF-Waltrip Ferrari 458. APR was the fastest of the Audis. Porsche claim the top three speeds during testing.

DAYTONA BEACH, Fla.– The “Roar Before the Rolex 24” paid unexpected dividends for AF- Waltrip. Not only was the team’s new Ferrari 458 ready for the three-day session last weekend at Daytona International Speedway, NASCAR driver Clint Bowyer quickly got up to speed in his first sports car test. 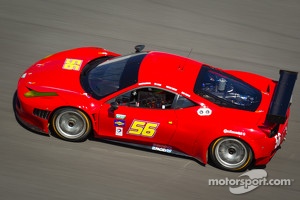 “It was amazing how quickly Clint adapted on his first time out in this type of car,” Kauffman added. “He was as quick as me on his first hot lap, and quickly caught up to Michael’s times. Within 10 laps, he was within a second of Rui, our lead driver.”

The No. 56 AF-Waltrip entry was second-fastest of the Ferrari 458s participating in the “Roar.” Quickest was the No. 69 AIM Autosport Team FXDD With Ferrari entry of Anthony Lazzaro, who co-drove with defending Rolex Series GT champ Emil Assentato, Nick Longhi and Guy Cosmo.

Audi also had a strong presence at the “Roar,” with Audi Sport Customer Racing supporting four cars tested by APR Motorsport, Rum Bum Racing and Alex Job Racing. Rene Rast was quickest of the Audis in the No. 52 APR Motorsport entry co-driven by Ian Baas and factory drivers Marc Basseng and Frank Stippler.

For Rum Bum Racing, it marked its first appearance in the Rolex Series after three years in the Continental Tire Sports Car Challenge, winning the 2012 Grand Sport team title.

“I felt comfortable the first time I sat in the car,” said Rum Bum Racing driver Matt Plumb. “It only took me a couple of laps to get up to speed. The entire group from Audi Sport Customer Racing is confidence inspiring. They’re helping everyone on our team learn the ins and outs of the car, and they’ve really surprised us with their level of support. Now we’ve got some notes to work from, se we feel we’ll be as prepared as we can be when we come back in two weeks.”

Porsche teams had the fastest three GT cars in the test, led by Patrick Long in the debut of the No. 73 Park Place Motorsports Porsche GT3 co-driven by Patrick Lindsey, Jason Hart, Spencer Pumpelly and Daniel Graeff.