The three day testing program with the AIM Autosport FXDD Racing With Ferrari teams completes preparation for the Rolex 24 at Daytona. 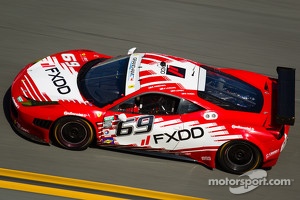 Cosmo spent his week working with team principal Ian Willis and with co-drivers Emil Assentato, Anthony Lazzaro & Nick Longhi. The team and drivers worked on reliability and car setups throughout the week, focusing on developing a strong 24 hour strategy.

"It was great getting acclimated with the AIM Autosport FXDD Racing With Ferrari team this week," said Cosmo. "We had a very successful test. I really enjoyed working with the AIM crew and my long-lost engineer Ian Willis. Of course, hanging with Segal, Lazzaro, Papis, Vilander, Longhi & Assentato was a total rip. Those guys are characters, and we had a blast."

"I'm really looking forward to the 24," added Cosmo, "It's one of the greatest endurance races in the world. I wasn't slated to race with Extreme Speed at Daytona this year and they've been gracious in allowing me to join AIM Autosport FXDD Racing for the event. That means I get to run with the 2012 Rolex Series GT champions and stay behind the wheel of a Ferrari. For one reason or another, success keeps eluding me at the Rolex 24. This is a new year, though... and my New Years resolution is to win races this year. So I'm fairly confident I'm going into the 2013 race with my best chances yet. The Rolex 24 at Daytona is an event every driver dreams of winning... and what better chance of getting it done than with the team and the Ferrari that won last years Championship."

Front row for Ferrari at Daytona