Tires are the single most important thing bolted on the race car and Continental Tire continues to deliver.

Continental Tires’ engineering team began designing the GRAND-AM tire in 2010 when they assumed the title sponsorship and tire supplier duties of the Continental Tire Sports Car Challenge.  Today’s race tire was born from in-house lab testing that was focused on developing the right compound and construction. 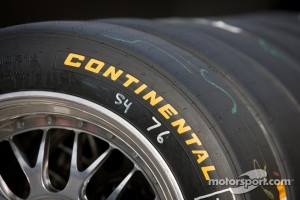 The tire design then moved to a variety of simulation programs before going to the track to be tested under controlled circumstances by a variety of classes, teams and drivers.  Once Continental Tire was named official tire supplier of GRAND-AM in 2011, the Rolex Series cars began testing, then in 2013, the PC class began testing tires for American Le Mans Series competition.

While a Continental Tire race tire looks deceptively simple, there is a tremendous amount of technology that goes into developing a tire that can withstand the high loads and high heat that a race tire endures.  When comparing a ZR1 Corvette to a Daytona Prototype (DP) Corvette, the ZR1 sees a “peak load” on its tires very rarely while a DP will see a “peak load” about 75 percent of the time during every lap at Road America.

Another challenge that the Continental Tire team was faced with was producing a tire that could run anywhere.  From the high banks of Daytona, to the mix of concrete and pavement at Indy, to the 14-turn, 4.048-mile natural road course of Road America, Continental Tire had to build a tire that would adapt to a variety of track surfaces and the team did just that.  Week after week, drivers and teams can focus on race strategy without worrying about the durability of the tire.

The company has tire compounds: for so-called “rovals” like Daytona, Indianapolis and the recent event at Kansas Speedway and for purpose-built road courses.

“Tires are the single-most important thing we bolt in or on a race car,” said James Stevens, GT engineer for Turner Motorsport. “They are the only thing that touches the race track.

“Fast car, engine and driver do not work without optimizing tire performance.”

While many believe that tire compounds – harder or softer for a given surface – is the key to speed, that’s not necessarily the case.

“That’s not always the case but it’s a general rule of thumb.”

A harder compound and less grip require teams to take the opposite approach along with different shock settings and not as much aerodynamic adjustments.

“The tires this year are definitely better than last year,” said Wise. “There is always room for improvement and I think they have some good tires for us in the works for next year.”

DP Driver Championship up for grabs